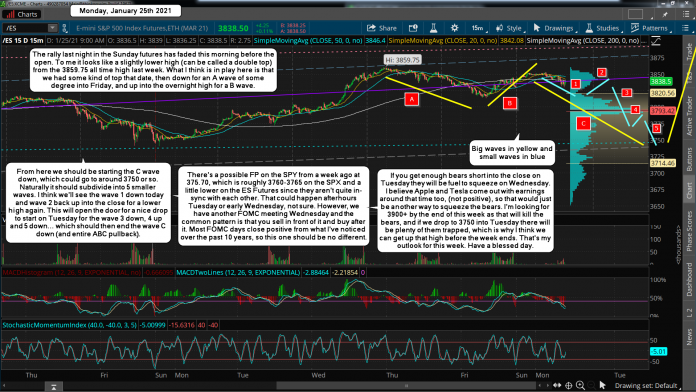 The rally last night in the Sunday futures has faded this morning before the open. To me it looks like a slightly lower high (can be called a double top) from the 3859.75 all time high last week. What I think is in play here is that we had some kind of top that date, then down for an A wave of some degree into Friday, and up into the overnight high for a B wave.

From here we should be starting the C wave down, which could go to around 3750 or so. Naturally it should subdivide into 5 smaller waves. I think we'll see the wave 1 down today and wave 2 back up into the close for a lower high again. This will open the door for a nice drop to start on Tuesday for the wave 3 down, 4 up and 5 down... which should then end the wave C down (and entire ABC pullback).

There's a possible FP on the SPY from a week ago at 375.70, which is roughly 3760-3765 on the SPX and a little lower on the ES Futures since they aren't quite in-sync with each other. That could happen afterhours Tuesday or early Wednesday, not sure. However, we have another FOMC meeting Wednesday and the common pattern is that you sell in front of it and buy after it. Most FOMC days close positive from what I've noticed over the past 10 years, so this one should be no different.

If you get enough bears short into the close on Tuesday they will be fuel to squeeze on Wednesday. I believe Apple and Tesla come out with earnings around that time too, (not positive), so that would just be another way to squeeze the bears. I'm looking for 3900+ by the end of this week as that will kill the bears, and if we drop to 3750 into Tuesday there will be plenty of them trapped, which is why I think we can get up that high before the week ends. That's my outlook for this week. Have a blessed day.