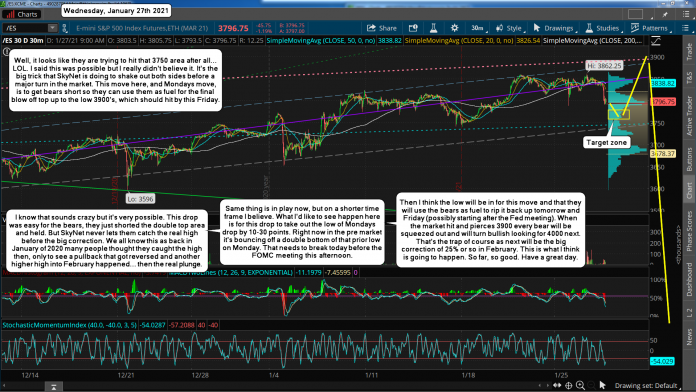 Well, it looks like they are trying to hit that 3750 area after all... LOL. I said this was possible but I really didn't believe it. It's the big trick that SkyNet is doing to shake out both sides before a major turn in the market. This move here, and Mondays move, is to get bears short so they can use them as fuel for the final blow off top up to the low 3900's, which should hit by this Friday.

I know that sounds crazy but it's very possible. This drop was easy for the bears, they just shorted the double top area and held. But SkyNet never lets them catch the real high before the big correction. We all know this as back in January of 2020 many people thought they caught the high then, only to see a pullback that got reversed and another higher high into February happened... then the real plunge.

Same thing is in play now, but on a shorter time frame I believe. What I'd like to see happen here is for this drop to take out the low of Mondays drop by 10-30 points. Right now in the pre market it's bouncing off a double bottom of that prior low on Monday. That needs to break today before the FOMC meeting this afternoon.

Then I think the low will be in for this move and that they will use the bears as fuel to rip it back up tomorrow and Friday (possibly starting after the Fed meeting). When the market hit and pierces 3900 every bear will be squeezed out and will turn bullish looking for 4000 next. That's the trap of course as next will be the big correction of 25% or so in February. This is what I think is going to happen. So far, so good. Have a great day.