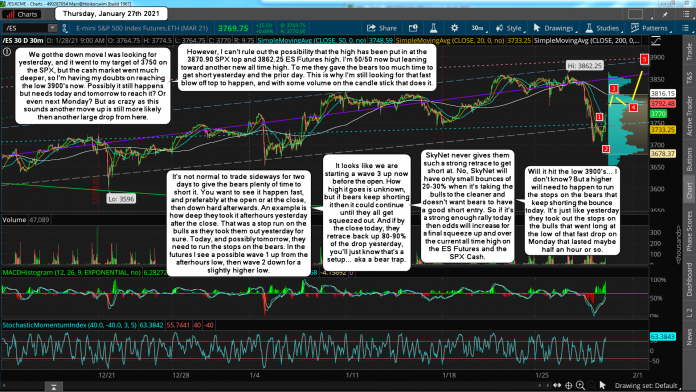 We got the down move I was looking for yesterday, and it went to my target of 3750 on the SPX, but the cash market went much deeper, so I'm having my doubts on reaching the low 3900's now. Possibly it still happens but needs today and tomorrow to reach it? Or even next Monday? But as crazy as this sounds another move up is still more likely then another large drop from here.

However, I can't rule out the possibility that the high has been put in at the 3870.90 SPX top and 3862.25 ES Futures high. I'm 50/50 now but leaning toward another new all time high. To me they gave the bears too much time to get short yesterday and the prior day. This is why I'm still looking for that fast blow off top to happen, and with some volume on the candle stick that does it.

It's not normal to trade sideways for two days to give the bears plenty of time to short it. You want to see it happen fast, and preferably at the open or at the close, then down hard afterwards. An example is how deep they took it afterhours yesterday after the close. That was a stop run on the bulls as they took them out yesterday for sure. Today, and possibly tomorrow, they need to run the stops on the bears. In the futures I see a possible wave 1 up from the afterhours low, then wave 2 down for a slightly higher low.

It looks like we are starting a wave 3 up now before the open. How high it goes is unknown, but if bears keep shorting it then it could continue until they all get squeezed out. And if by the close today, they retrace back up 80-90% of the drop yesterday, you'll just know that's a setup... aka a bear trap.

SkyNet never gives them such a strong retrace to get short at. No, SkyNet will have only small bounces of 20-30% when it's taking the bulls to the cleaner and doesn't want bears to have a good short entry. So if it's a strong enough rally today then odds will increase for a final squeeze up and over the current all time high on the ES Futures and the SPX Cash.

Will it hit the low 3900's... I don't know? But a higher will need to happen to run the stops on the bears that keep shorting the bounce today. It's just like yesterday they took out the stops on the bulls that went long at the low of that fast drop on Monday that lasted maybe half an hour or so.

That drop went to 3788 and we hit 3703 afterhours yesterday, so that 80+ points lower of stop running on the bulls. So don't completely rule out something similar here on the bulls. Maybe it doesn't have to be 80+ points over the current all time highs, but it could certainly do half of that to take out the bears. So today is likely the most powerful day up, and Friday might be choppy. Have a great day.