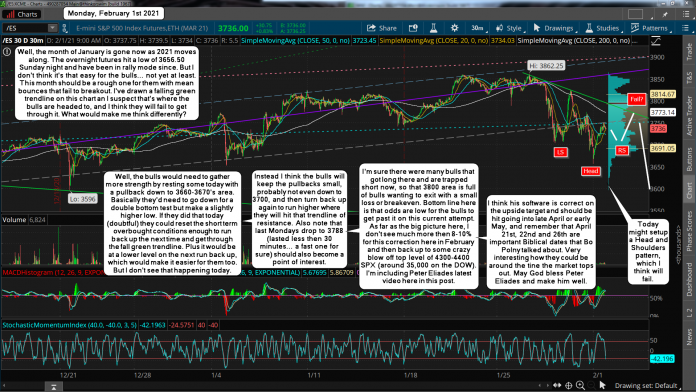 Well, the month of January is gone now as 2021 moves along. The overnight futures hit a low of 3656.50 Sunday night and have been in rally mode since. But I don't think it's that easy for the bulls... not yet at least. This month should be a rough one for them with mean bounces that fail to breakout. I've drawn a falling green trendline on this chart an I suspect that's where the bulls are headed to, and I think they will fail to get through it. What would make me think differently?

Well, the bulls would need to gather more strength by resting some today with a pullback down to 3660-3670's area. Basically they'd need to go down for a double bottom test but make a slightly higher low. If they did that today (doubtful) they could reset the short term overbought conditions enough to run back up the next time and get through the fall green trendline. Plus it would be at a lower level on the next run back up, which would make it easier for them too. But I don't see that happening today.

Instead I think the bulls will keep the pullbacks small, probably not even down to 3700, and then turn back up again to run higher where they will hit that trendline of resistance. Also note that last Mondays drop to 3788 (lasted less then 30 minutes... a fast one for sure) should also become a point of interest.

I'm sure there were many bulls that got long there and are trapped short now, so that 3800 area is full of bulls wanting to exit with a small loss or breakeven. Bottom line here is that odds are low for the bulls to get past it on this current attempt. As far as the big picture here, I don't see much more then 8-10% for this correction here in February and then back up to some crazy blow off top level of 4300-4400 SPX (around 35,000 on the DOW). I'm including Peter Eliades latest video here in this post.

I think his software is correct on the upside target and should be hit going into late April or early May, and remember that April 21st, 22nd and 26th are important Biblical dates that Bo Polny talked about. Very interesting how they could be around the tine the market tops out. May God bless Peter Eliades and make him well.