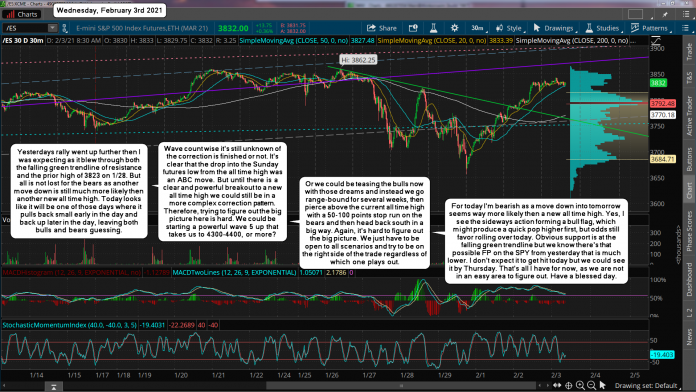 Yesterdays rally went up further then I was expecting as it blew through both the falling green trendline of resistance and the prior high of 3823 on 1/28. But all is not lost for the bears as another move down is still much more likely then another new all time high. Today looks like it will be one of those days where it pulls back small early in the day and back up later in the day, leaving both bulls and bears guessing.

Wave count wise it's still unknown of the correction is finished or not. It's clear that the drop into the Sunday futures low from the all time high was an ABC move. But until there is a clear and powerful breakout to a new all time high we could still be in a more complex correction pattern. Therefore, trying to figure out the big picture here is hard. We could be starting a powerful wave 5 up that takes us to 4300-4400, or more?

Or we could be teasing the bulls now with those dreams and instead we go range-bound for several weeks, then pierce above the current all time high with a 50-100 points stop run on the bears and then head back south in a big way. Again, it's hard to figure out the big picture. We just have to be open to all scenarios and try to be on the right side of the trade regardless of which one plays out.

For today I'm bearish as a move down into tomorrow seems way more likely then a new all time high. Yes, I see the sideways action forming a bull flag, which might produce a quick pop higher first, but odds still favor rolling over today. Obvious support is at the falling green trendline but we know there's that possible FP on the SPY from yesterday that is much lower. I don't expect it to get hit today but we could see it by Thursday. That's all I have for now, as we are not in an easy area to figure out. Have a blessed day.