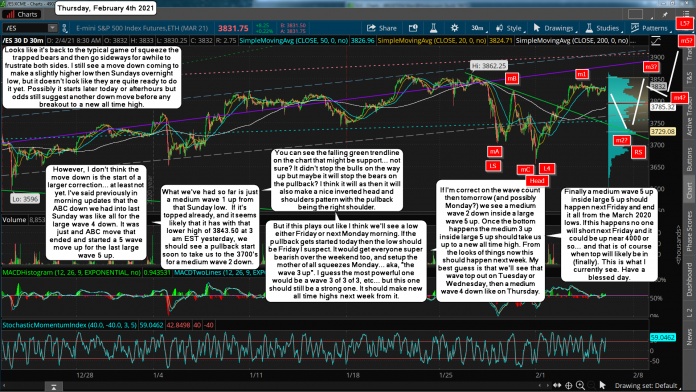 Looks like it's back to the typical game of squeeze the trapped bears and then go sideways for awhile to frustrate both sides. I still see a move down coming to make a slightly higher low then Sundays overnight low, but it doesn't look like they are quite ready to do it yet. Possibly it starts later today or afterhours but odds still suggest another down move before any breakout to a new all time high.

However, I don't think the move down is the start of a larger correction... at least not yet. I've said previously in morning updates that the ABC down we had into last Sunday was like all for the large wave 4 down. It was just and ABC move that ended and started a 5 wave move up for the last large wave 5 up.

What we've had so far is just a medium wave 1 up from that Sunday low.  If it's topped already, and it seems likely that it has with that lower high of 3843.50 at 3 am EST yesterday, we should see a pullback start soon to take us to the 3700's for a medium wave 2 down.

You can see the falling green trendline on the chart that might be support... not sure? It didn't stop the bulls on the way up but maybe it will stop the bears on the pullback? I think it will as then it will also make a nice inverted head and shoulders pattern with the pullback being the right shoulder.

But if this plays out like I think we'll see a low either Friday or next Monday morning. If the pullback gets started today then the low should be Friday I suspect. It would get everyone super bearish over the weekend too, and setup the mother of all squeezes Monday... aka, "the wave 3 up". I guess the most powerful one would be a wave 3 of 3 of 3, etc... but this one should still be a strong one. It should make new all time highs next week from it.

If I'm correct on the wave count then tomorrow (and possibly Monday?) we see a medium wave 2 down inside a large wave 5 up. Once the bottom happens the medium 3 up inside large 5 up should take us up to a new all time high. From the looks of things now this should happen next week. My best guess is that we'll see that wave top out on Tuesday or Wednesday, then a medium wave 4 down like on Thursday.

Finally a medium wave 5 up inside large 5 up should happen next Friday and end it all from the March 2020 lows. If this happens no one will short next Friday and it could be up near 4000 or so... and that is of course when top will likely be in (finally). This is what I currently see. Have a blessed day.