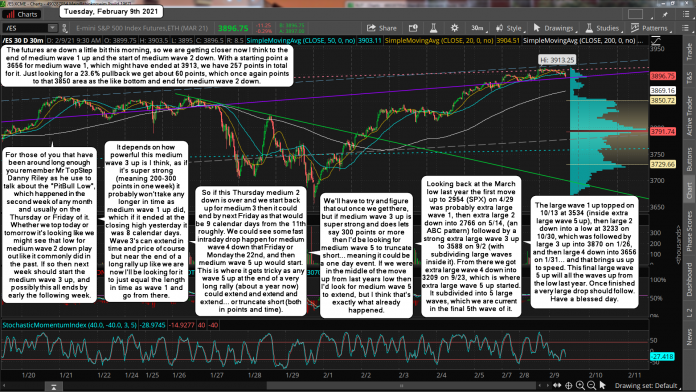 For those of you that have been around long enough you remember Mr TopStep Danny Riley as he use to talk about the "PitBull Low", which happened in the second week of any month and usually on the Thursday or Friday of it. Whether we top today or tomorrow it's looking like we might see that low for medium wave 2 down play out like it commonly did in the past. If so then next week should start the medium wave 3 up, and possibly this all ends by early the following week.

It depends on how powerful this medium wave 3 up is I think, as if it's super strong (meaning 200-300 points in one week) it probably won't take any longer in time as medium wave 1 up did, which if it ended at the closing high yesterday it was 8 calendar days. Wave 3's can extend in time and price of course but near the end of a long rally up like we are now I'll be looking for it to just equal the length in time as wave 1 and go from there.

So if this Thursday medium 2 down is over and we start back up for medium 3 then it could end by next Friday as that would be 9 calendar days from the 11th roughly. We could see some fast intraday drop happen for medium wave 4 down that Friday or Monday the 22nd, and then medium wave 5 up would start. This is where it gets tricky as any wave 5 up at the end of a very long rally (about a year now) could extend and extend and extend... or truncate short (both in points and time).

We'll have to try and figure that out once we get there, but if medium wave 3 up is super strong and does lets say 300 points or more then I'd be looking for medium wave 5 to truncate short... meaning it could be a one day event. If we were in the middle of the move up from last years low then I'd look for medium wave 5 to extend, but I think that's exactly what already happened.