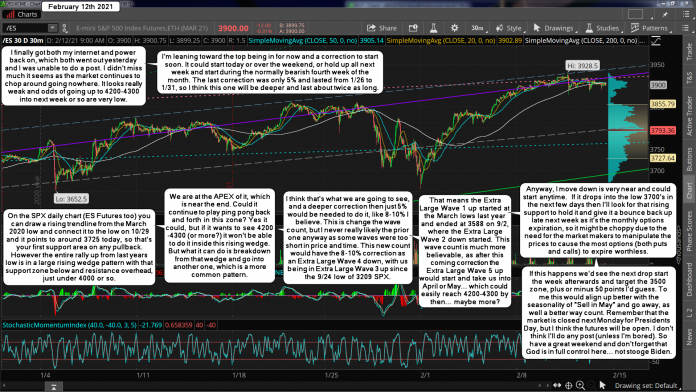 I finally got both my internet and power back on, which both went out yesterday and I was unable to do a post. I didn't miss much it seems as the market continues to chop around going nowhere. It looks really weak and odds of going up to 4200-4300 into next week or so are very low.

I'm leaning toward the top being in for now and a correction to start soon. It could start today or over the weekend, or hold up all next week and start during the normally bearish fourth week of the month. The last correction was only 5% and lasted from 1/26 to 1/31, so I think this one will be deeper and last about twice as long.

On the SPX daily chart (ES Futures too) you can draw a rising trendline from the March 2020 low and connect it to the low on 10/29 and it points to around 3725 today, so that's your first support area on any pullback. However the entire rally up from last years low is in a large rising wedge pattern with that support zone below and resistance overhead, just under 4000 or so.

We are at the APEX of it, which is near the end. Could it continue to play ping pong back and forth in this zone? Yes it could, but if it wants to see 4200-4300 (or more?) it won't be able to do it inside this rising wedge. But what it can do is breakdown from that wedge and go into another one, which is a more common pattern.

I think that's what we are going to see, and a deeper correction then just 5% would be needed to do it, like 8-10% I believe. This is change the wave count, but I never really likely the prior one anyway as some waves were too short in price and time. This new count would have the 8-10% correction as an Extra Large Wave 4 down, with us being in Extra Large Wave 3 up since the 9/24 low of 3209 SPX.

Anyway, I move down is very near and could start anytime.  If it drops into the low 3700's in the next few days then I'll look for that rising support to hold it and give it a bounce back up late next week as it's the monthly options expiration, so it might be choppy due to the need for the market makers to manipulate the prices to cause the most options (both puts and calls) to expire worthless.

If this happens we'd see the next drop start the week afterwards and target the 3500 zone, plus or minus 50 points I'd guess. To me this would align up better with the seasonality of "Sell in May" and go away, as well a better way count. Remember that the market is closed next Monday for Presidents Day, but I think the futures will be open. I don't think I'll do any post (unless I'm bored). So have a great weekend and don't forget that God is in full control here... not stooge Biden.