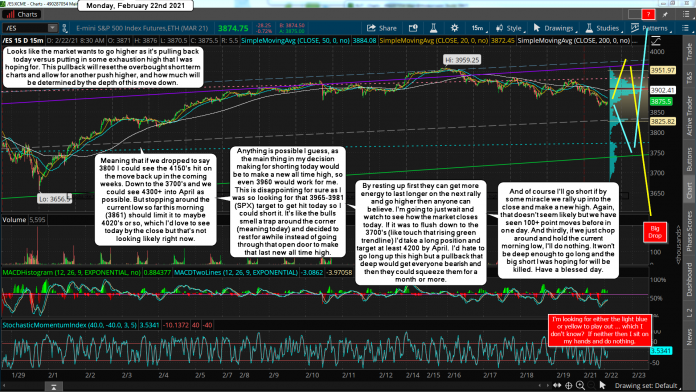 Looks like the market wants to go higher as it's pulling back today versus putting in some exhaustion high that I was hoping for. This pullback will reset the overbought short term charts and allow for another push higher, and how much will be determined by the depth of this move down.

Meaning that if we dropped to say 3800 I could see the 4150's hit on the move back up in the coming weeks. Down to the 3700's and we could see 4300+ into April as possible. But stopping around the current low so far this morning (3861) should limit it to maybe 4020's or so, which I'd love to see today by the close but that's not looking likely right now.

Anything is possible I guess, as the main thing in my decision making for shorting today would be to make a new all time high, so even 3960 would work for me. This is disappointing for sure as I was so looking for that 3965-3981 (SPX) target to get hit today so I could short it. It's like the bulls smell a trap around the corner (meaning today) and decided to rest for awhile instead of going through that open door to make that last new all time high.

By resting up first they can get more energy to last longer on the next rally and go higher then anyone can believe. I'm going to just wait and watch to see how the market closes today. If it was to flush down to the 3700's (like touch that rising green trendline) I'd take a long position and target at least 4200 by April. I'd hate to go long up this high but a pullback that deep would get everyone bearish and then they could squeeze them for a month or more.

And of course I'll go short if by some miracle we rally up into the close and make a new high. Again, that doesn't seem likely but we have seen 100+ point moves before in one day. And thirdly, if we just chop around and hold the current morning low, I'll do nothing. It won't be deep enough to go long and the big short I was hoping for will be killed. Have a blessed day.