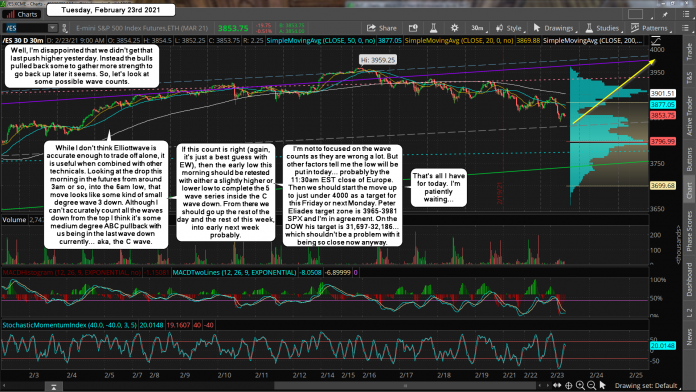 Well, I'm disappointed that we didn't get that last push higher yesterday. Instead the bulls pulled back some to gather more strength to go back up later it seems. So, let's look at some possible wave counts.

While I don't think Elliottwave is accurate enough to trade off alone, it is useful when combined with other technicals. Looking at the drop this morning in the futures from around 3am or so, into the 6am low, that move looks like some kind of small degree wave 3 down. Although I can't accurately count all the waves down from the top I think it's some medium degree ABC pullback with us being in the last wave down currently... aka, the C wave.

If this count is right (again, it's just a best guess with EW), then the early low this morning should be retested with either a slightly higher or lower low to complete the 5 wave series inside the C wave down. From there we should go up the rest of the day and the rest of this week, into early next week probably.

I'm not to focused on the wave counts as they are wrong a lot. But other factors tell me the low will be put in today... probably by the 11:30am EST close of Europe. Then we should start the move up to just under 4000 as a target for this Friday or next Monday. Peter Eliades target zone is 3965-3981 SPX and I'm in agreement. On the DOW his target is 31,697-32,186... which shouldn't be a problem with it being so close now anyway.

That's all I have for today. I'm patiently waiting...