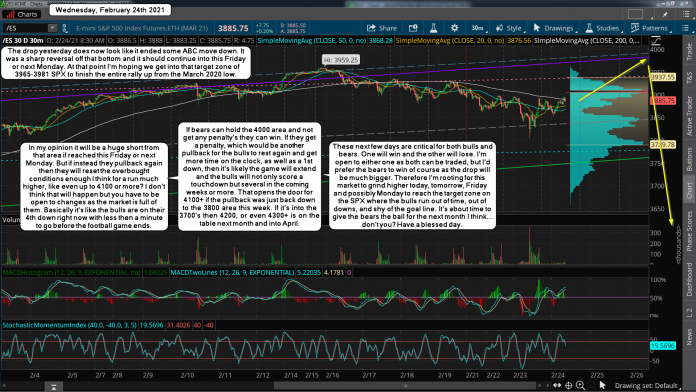 The drop yesterday does now look like it ended some ABC move down. It was a sharp reversal off that bottom and it should continue into this Friday or next Monday. At that point I'm hoping we get into that target zone of 3965-3981 SPX to finish the entire rally up from the March 2020 low.

In my opinion it will be a huge short from that area if reached this Friday or next Monday. But if instead they pullback again then they will reset the overbought conditions enough I think for a run much higher, like even up to 4100 or more? I don't think that will happen but you have to be open to changes as the market is full of them. Basically it's like the bulls are on their 4th down right now with less then a minute to go before the football game ends.

If bears can hold the 4000 area and not get any penalty's they can win. If they get a penalty, which would be another pullback for the bulls to rest again and get more time on the clock, as well as a 1st down, then it's likely the game will extend and the bulls will not only score a touchdown but several in the coming weeks or more. That opens the door for 4100+ if the pullback was just back down to the 3800 area this week. If it's into the 3700's then 4200, or even 4300+ is on the table next month and into April.

These next few days are critical for both bulls and bears. One will win and the other will lose. I'm open to either one as both can be traded, but I'd prefer the bears to win of course as the drop will be much bigger. Therefore I'm rooting for this market to grind higher today, tomorrow, Friday and possibly Monday to reach the target zone on the SPX where the bulls run out of time, out of downs, and shy of the goal line. It's about time to give the bears the ball for the next month I think... don't you? Have a blessed day.