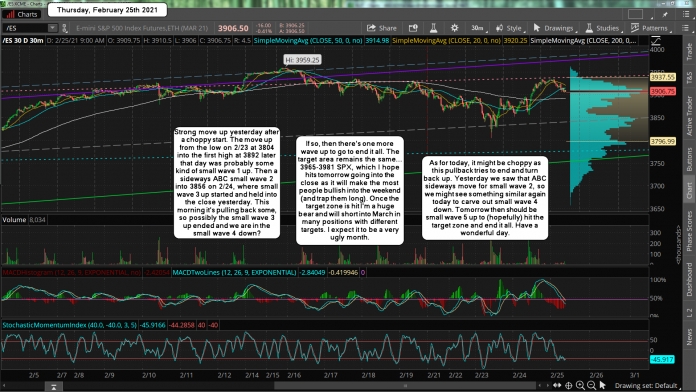 Strong move up yesterday after a choppy start. The move up from the low on 2/23 at 3804 into the first high at 3892 later that day was probably some kind of small wave 1 up. Then a sideways ABC small wave 2 into 3856 on 2/24, where small wave 3 up started and held into the close yesterday. This morning it's pulling back some, so possibly the small wave 3 up ended and we are in the small wave 4 down?

If so, then there's one more wave up to go to end it all. The target area remains the same... 3965-3981 SPX, which I hope hits tomorrow going into the close as it will make the most people bullish into the weekend (and trap them long). Once the target zone is hit I'm a huge bear and will short into March in many positions with different targets. I expect it to be a very ugly month.

As for today, it might be choppy as this pullback tries to end and turn back up. Yesterday we saw that ABC sideways move for small wave 2, so we might see something similar again today to carve out small wave 4 down. Tomorrow then should be small wave 5 up to (hopefully) hit the target zone and end it all. Have a wonderful day.