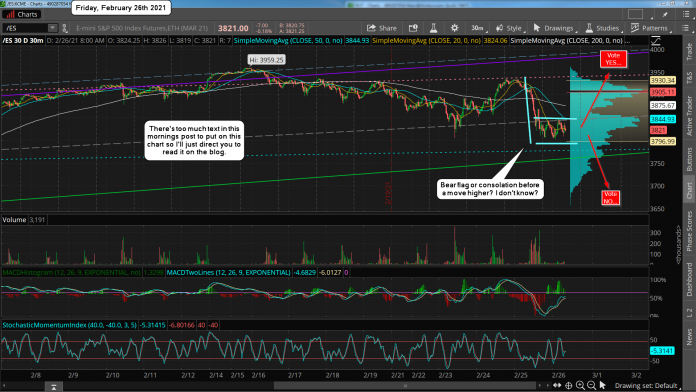 And just like that the entire rally was wiped out in just one day. This is clearly a sign of weakness for the bulls I think. I re-did the wave count last night and called yesterdays drop a medium wave 2 down inside a large wave 3 up. This can of course change if for example the market was to go up huge the next couple of days and put in a new all time high too quickly. 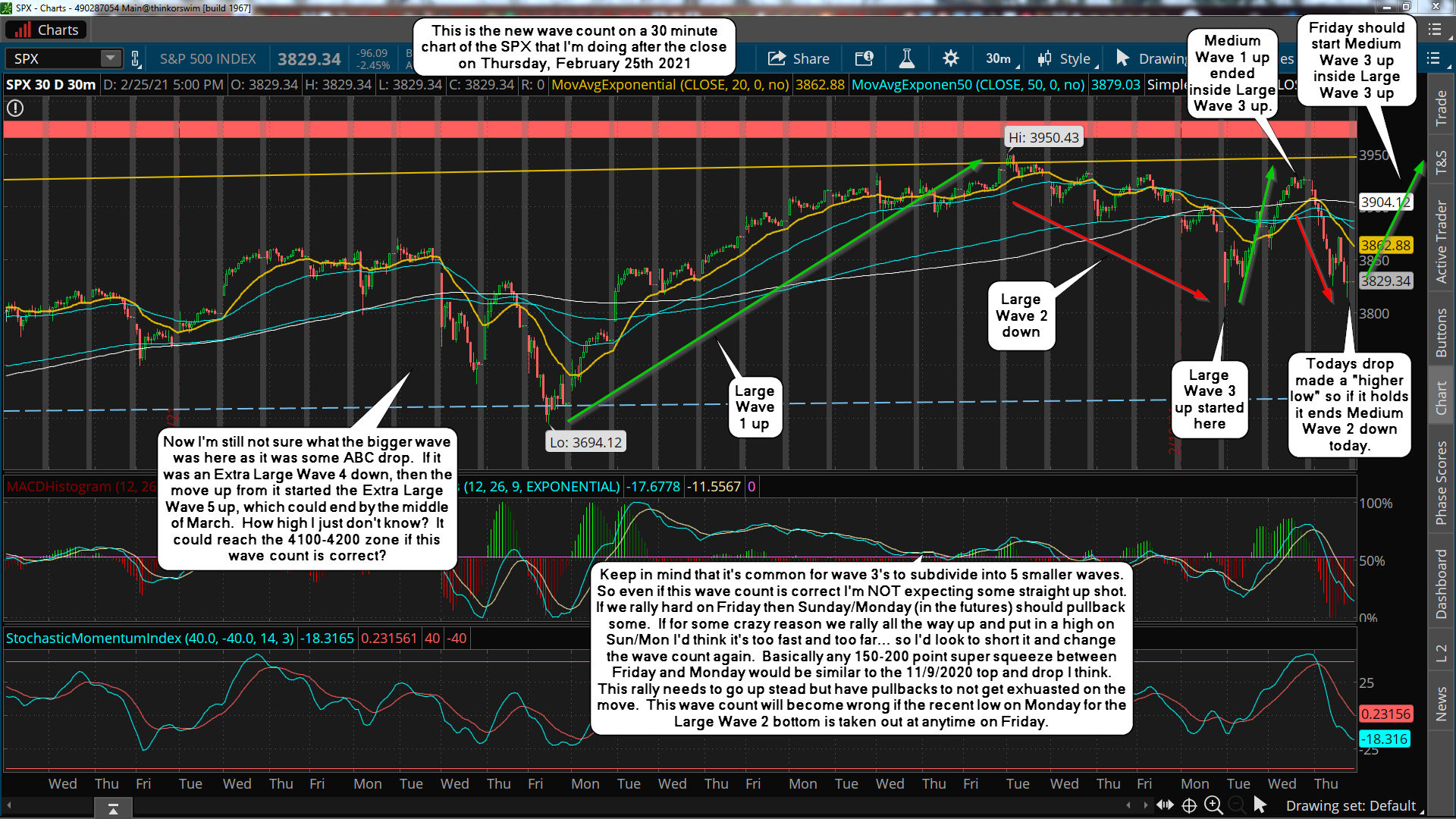 I'd call that an exhaustion blow off top similar to the 11/9/2020 squeeze that happened on the back of the vaccine news coming out that day. It was an "event driven" rally, and that's not what the bulls want if they want to have multi-week move up. So if some new event news comes out and causes such a squeeze today and into Sunday/Monday, where we reach a new all time high on the SPX (since it's not hit one yet but the DOW did) then I'd be a bear again expecting a much deep drop to follow starting next week.

What could such a news event be you ask? Well, I think the House of Congress is voting this morning on the new stimulus bill. So if they pass it that news could spark a big squeeze. I say "could" as it would still have to be voted on by the House of Senate, but you never know how the market will view it? Possibly the market will think it's a "shoo-in"... meaning it is expected to pass there too? I don't know?

I just want to warn everyone that moving up too fast is not usually sustainable. Yeah, I'm sure they got a lot a new bears short yesterday and can use them for fuel to squeeze all the way back up to a double top area. But if the bulls want to go up much higher in the coming weeks they will pause at that prior high zone and stay under it for awhile to allow more bears to short it. Then after several days of bears piling on you can then push up through and start running the stops on those new bears.

However, if the bulls push through into Sunday/Monday they will likely burn through all the stops the bears from yesterday likely put just above the prior high of 3934 and the all time high of 3959 (ES Futures). Bulls would be wise to NOT burn through all those stop to reach the 3980-4000 in just the next 2-3 days. While yesterdays drop surprised me for sure, I think it did that to most other traders too.

The amount of bears that caught the top and shorted it are not high most likely. That suggests many shorted the bounce midday yesterday, and while you can hit those bear stops to get the rally going back up over that level (3869 ES), getting through the all time shouldn't be a easy.

Yeah, there will be some stops there, but how do you keep going up after you hit them all? You have to have new buyers right? Will that be the Fed with stimulus money? NO, as it will still have to pass the House of Senate, and I don't know when that will be up for vote but certainly not next Monday. This again is why I'm saying that an event driven rally won't likely hold and a big drop should happen into early March if such new all time high was to occur too fast.

The opposite of this would of course be another drop lower into Sunday/Monday, which then should be in a more secure bottom that a powerful and longer lasting (weeks) rally could start from. This would change the wave count of course. I'd then just scrap the Medium wave 1, 2 and 3 and extend the Large Wave 2 down from bottoming at the 3805 (SPX) low on 2/23 to whatever new low we'd get into the next 1-2 days. This assumes the 3694 (SPX) holds and a new lower low doesn't happen. If so it's back to the drawing board. Have a great weekend and good luck trading this crazy market.