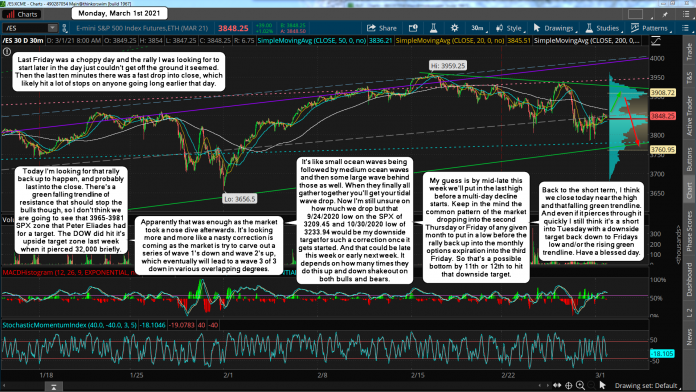 Last Friday was a choppy day and the rally I was looking for to start later in the day just couldn't get off the ground it seemed. Then the last ten minutes there was a fast drop into close, which likely hit a lot of stops on anyone going long earlier that day.

Today I'm looking for that rally back up to happen, and probably last into the close. There's a green falling trendline of resistance that should stop the bulls though, so I don't think we are going to see that 3965-3981 SPX zone that Peter Eliades had for a target. The DOW did hit it's upside target zone last week when it pierced 32,000 briefly.

Apparently that was enough as the market took a nose dive afterwards. It's looking more and more like a nasty correction is coming as the market is try to carve out a series of wave 1's down and wave 2's up, which eventually will lead to a wave 3 of 3 down in various overlapping degrees.

It's like small ocean waves being followed by medium ocean waves and then some large wave behind those as well. When they finally all gather together you'll get your tidal wave drop. Now I'm still unsure on how much we drop but that 9/24/2020 low on the SPX of 3209.45 and 10/30/2020 low of 3233.94 would be my downside target for such a correction once it gets started. And that could be late this week or early next week. It depends on how many times they do this up and down shakeout on both bulls and bears.

My guess is by mid-late this week we'll put in the last high before a multi-day decline starts. Keep in the mind the common pattern of the market dropping into the second Thursday or Friday of any given month to put in a low before the rally back up into the monthly options expiration into the third Friday. So that's a possible bottom by 11th or 12th to hit that downside target.

Back to the short term, I think we close today near the high and that falling green trendline. And even if it pierces through it quickly I still think it's a short into Tuesday with a downside target back down to Fridays low and/or the rising green trendline. Have a blessed day.