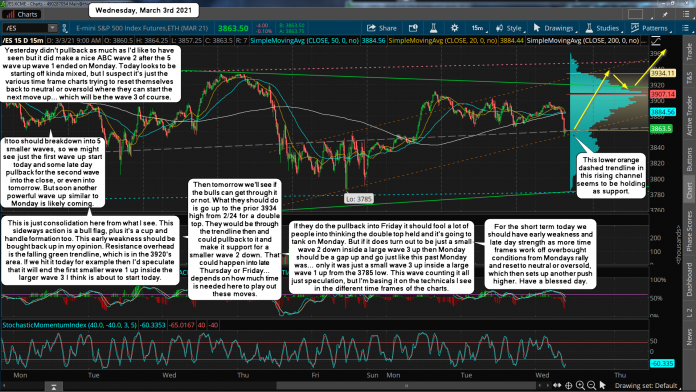 Yesterday didn't pullback as much as I'd like to have seen but it did make a nice ABC wave 2 after the 5 wave up wave 1 ended on Monday. Today looks to be starting off kinda mixed, but I suspect it's just the various time frame charts trying to reset themselves back to neutral or oversold where they can start the next move up... which will be the wave 3 of course.

It too should breakdown into 5 smaller waves, so we might see just the first wave up start today and some late day pullback for the second wave into the close, or even into tomorrow. But soon another powerful wave up similar to Monday is likely coming.

This is just consolidation here from what I see. This sideways action is a bull flag, plus it's a cup and handle formation too. This early weakness should be bought back up in my opinion. Resistance overhead is the falling green trendline, which is in the 3920's area. If we hit it today for example then I'd speculate that it will end the first smaller wave 1 up inside the larger wave 3 I think is about to start today.

Then tomorrow we'll see if the bulls can get through it or not. What they should do is go up to the prior 3934 high from 2/24 for a double top. They would be through the trendline then and could pullback to it and make it support for a smaller wave 2 down. That could happen into late Thursday or Friday... depends on how much time is needed here to play out these moves.

If they do the pullback into Friday it should fool a lot of people into thinking the double top held and it's going to tank on Monday. But if it does turn out to be just a small wave 2 down inside a large wave 3 up then Monday should be a gap up and go just like this past Monday was... only it was just a small wave 3 up inside a large wave 1 up from the 3785 low. This wave counting it all just speculation, but I'm basing it on the technicals I see in the different time frames of the charts.

For the short term today we should have early weakness and late day strength as more time frames work off overbought conditions from Mondays rally and reset to neutral or oversold, which then sets up another push higher. Have a blessed day.