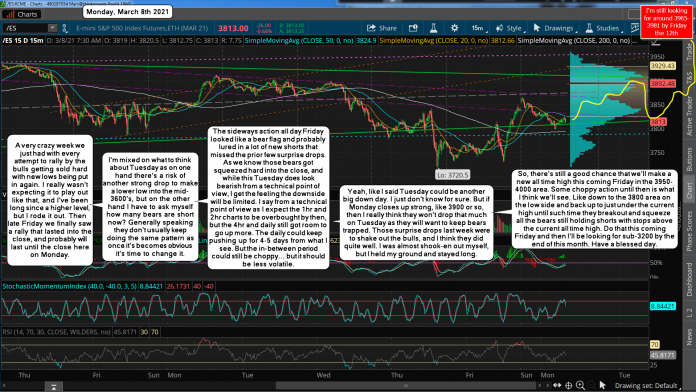 A very crazy week we just had with every attempt to rally by the bulls getting sold hard with new lows being put in again. I really wasn't expecting it to play out like that, and I've been long since a higher level, but I rode it out. Then late Friday we finally saw a rally that lasted into the close, and probably will last until the close here on Monday.

I'm mixed on what to think about Tuesday as on one hand there's a risk of another strong drop to make a lower low into the mid-3600's, but on the other hand I have to ask myself how many bears are short now? Generally speaking they don't usually keep doing the same pattern as once it's becomes obvious it's time to change it.

The sideways action all day Friday looked like a bear flag and probably lured in a lot of new shorts that missed the prior few surprise drops. As we know those bears got squeezed hard into the close, and while this Tuesday does look bearish from a technical point of view, I get the feeling the downside will be limited. I say from a technical point of view as I expect the 1hr and 2hr charts to be overbought by then, but the 4hr and daily still got room to go up more. The daily could keep pushing up for 4-5 days from what I see. But the in-between period could still be choppy... but it should be less volatile.

Yeah, like I said Tuesday could be another big down day. I just don't know for sure. But if Monday closes up strong, like 3900 or so, then I really think they won't drop that much on Tuesday as they will want to keep bears trapped. Those surprise drops last week were to shake out the bulls, and I think they did quite well. I was almost shook-en out myself, but I held my ground and stayed long.

So, there's still a good chance that we'll make a new all time high this coming Friday in the 3950-4000 area. Some choppy action until then is what I think we'll see. Like down to the 3800 area on the low side and back up to just under the current high until such time they breakout and squeeze all the bears still holding shorts with stops above the current all time high. Do that this coming Friday and then I'll be looking for sub-3200 by the end of this month. Have a blessed day.