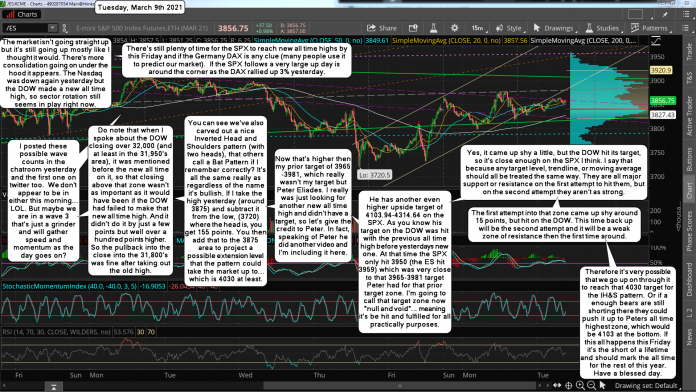 The market isn't going straight up but it's still going up mostly like I thought it would. There's more consolidation going on under the hood it appears. The Nasdaq was down again yesterday but the DOW made a new all time high, so sector rotation still seems in play right now.

There's still plenty of time for the SPX to reach new all time highs by this Friday and if the Germany DAX is any clue (many people use it to predict our market).  If the SPX follows a very large up day is around the corner as the DAX rallied up 3% yesterday.

I posted these possible wave counts in the chatroom yesterday and the first one on twitter too.  We don't appear to be in either this morning... LOL. But maybe we are in a wave 3 that's just a grinder and will gather speed and momentum as the day goes on?

We could get a face ripper tomorrow. The 3800 level should NOT be broken afterhours or premarket. If so then this wave count is wrong. pic.twitter.com/VE0eDhn2L0

Do note that when I spoke about the DOW closing over 32,000 (and at least in the 31,950's area), it was mentioned before the new all time on it, so that closing above that zone wasn't as important as it would have been if the DOW had failed to make that new all time high. And it didn't do it by just a few points but well over a hundred points higher. So the pullback into the close into the 31,800's was fine after taking out the old high. 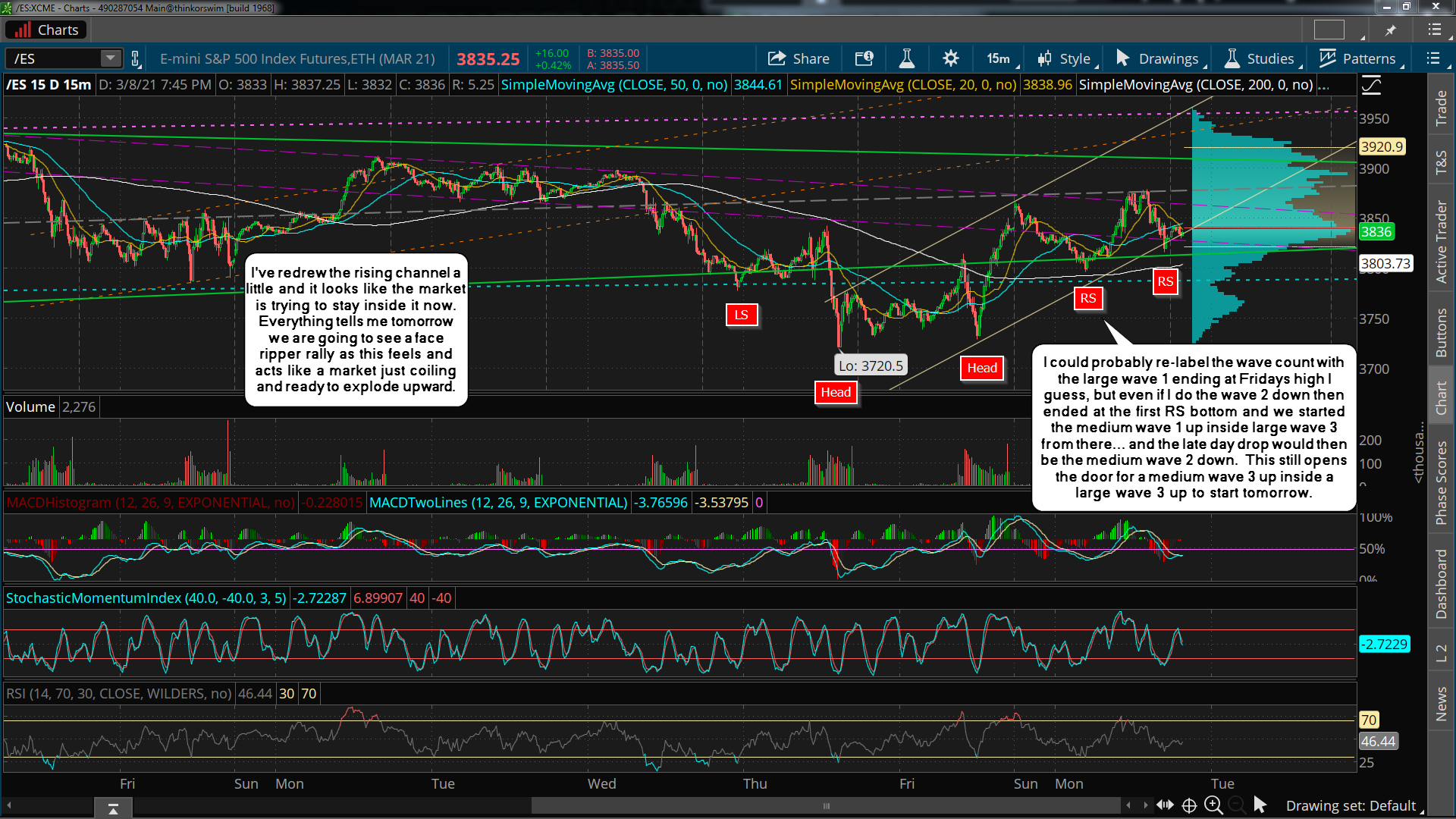 You can see we've also carved out a nice Inverted Head and Shoulders pattern (with two heads), that others call a Bat Pattern if I remember correctly? It's all the same really as regardless of the name it's bullish. If I take the high yesterday (around 3875) and subtract it from the low, (3720) where the head is, you get 155 points. You then add that to the 3875 area to project a possible extension level that the pattern could take the market up to... which is 4030 at least.

Now that's higher then my prior target of 3965-3981, which really wasn't my target but Peter Eliades. I really was just looking for another new all time high and didn't have a target, so let's give the credit to Peter. In fact, speaking of Peter he did another video and I'm including it here.

He has another even higher upside target of 4103.94-4314.64 on the SPX. As you know his target on the DOW was hit with the previous all time high before yesterdays new one. At that time the SPX only hit 3950 (the ES hit 3959) which was very close to that 3965-3981 target Peter had for that prior target zone. I'm going to call that target zone now "null and void"... meaning it's be hit and fulfilled for all practically purposes.

Yes, it came up shy a little, but the DOW hit its target, so it's close enough on the SPX I think. I say that because any target level, trendline, or moving average should all be treated the same way. They are all major support or resistance on the first attempt to hit them, but on the second attempt they aren't as strong.

The first attempt into that zone came up shy around 15 points, but hit on the DOW. This time back up will be the second attempt and it will be a weak zone of resistance then the first time around.

Therefore it's very possible that we go up on through it to reach that 4030 target for the IH&S pattern. Or if a enough bears are still shorting there they could push it up to Peters all time highest zone, which would be 4103 at the bottom. If this all happens this Friday it's the short of a lifetime and should mark the all time for the rest of this year. Have a blessed day.