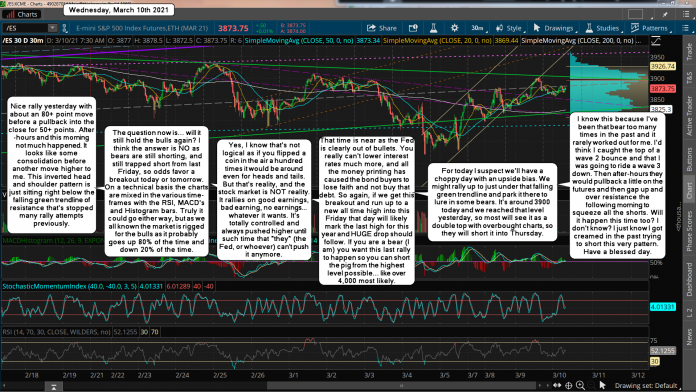 Nice rally yesterday with about an 80+ point move before a pullback into the close for 50+ points. After-hours and this morning not much happened. It looks like some consolidation before another move higher to me. This inverted head and shoulder pattern is just sitting right below the falling green trendline of resistance that's stopped many rally attempts previously.

The question now is... will it still hold the bulls again? I think the answer is NO as bears are still shorting, and still trapped short from last Friday, so odds favor a breakout today or tomorrow. On a technical basis the charts are mixed in the various time-frames with the RSI, MACD's and Histogram bars. Truly it could go either way, but as we all known the market is rigged for the bulls as it probably goes up 80% of the time and down 20% of the time.

Yes, I know that's not logical as if you flipped a coin in the air a hundred times it would be around even for heads and tails. But that's reality, and the stock market is NOT reality. It rallies on good earnings, bad earning, no earnings... whatever it wants. It's totally controlled and always pushed higher until such time that "they" (the Fed, or whoever) can't push it anymore.

That time is near as the Fed is clearly out of bullets. You really can't lower interest rates much more, and all the money printing has caused the bond buyers to lose faith and not buy that debt. So again, if we get this breakout and run up to a new all time high into this Friday that day will likely mark the last high for this year and HUGE drop should follow. If you are a bear (I am) you want this last rally to happen so you can short the pig from the highest level possible... like over 4,000 most likely.

For today I suspect we'll have a choppy day with an upside bias. We might rally up to just under that falling green trendline and park it there to lure in some bears. It's around 3900 today and we reached that level yesterday, so most will see it as a double top with overbought charts, so they will short it into Thursday.

I know this because I've been that bear too many times in the past and it rarely worked out for me. I'd think I caught the top of a wave 2 bounce and that I was going to ride a wave 3 down. Then after-hours they would pullback a little on the futures and then gap up and over resistance the following morning to squeeze all the shorts. Will it happen this time too? I don't know? I just know I got creamed in the past trying to short this very pattern. Have a blessed day.