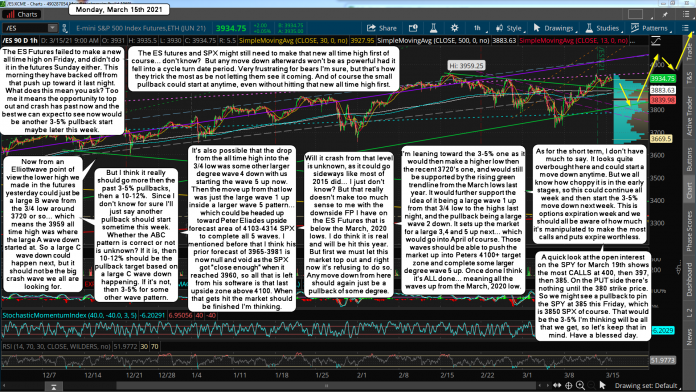 Don't Hit The PANIC Button Yet...

The ES Futures failed to make a new all time high on Friday, and didn't do it in the futures Sunday either. This morning they have backed off from that push up toward it last night. What does this mean you ask? Too me it means the opportunity to top out and crash has past now and the best we can expect to see now would be another 3-5% pullback start maybe later this week.

The ES futures and SPX might still need to make that new all time high first of course... don't know?  But any move down afterwards won't be as powerful had it fell into a cycle turn date period. Very frustrating for bears I'm sure, but that's how they trick the most as be not letting them see it coming. And of course the small pullback could start at anytime, even without hitting that new all time high first.

Now from an Elliottwave point of view the lower high we made in the futures yesterday could just be a large B wave from the 3/4 low around 3720 or so... which means the 3959 all time high was where the large A wave down started at. So a large C wave down could happen next, but it should not be the big crash wave we all are looking for.

But I think it really should go more then the past 3-5% pullbacks, then a 10-12%.  Since I don't know for sure I'll just say another pullback should start sometime this week. Whether the ABC pattern is correct or not is unknown? If it is, then 10-12% should be the pullback target based on a large C wave down happening. If it's not, then 3-5% for some other wave pattern.

It's also possible that the drop from the all time high into the 3/4 low was some other larger degree wave 4 down with us starting the wave 5 up now. Then the move up from that low was just the large wave 1 up inside a larger wave 5 pattern... which could be headed up toward Peter Eliades upside forecast area of 4103-4314 SPX to complete all 5 waves. I mentioned before that I think his prior forecast of 3965-3981 is now null and void as the SPX got "close enough" when it reached 3960, so all that is left from his software is that last upside zone above 4100. When that gets hit the market should be finished I'm thinking.

Will it crash from that level is unknown, as it could go sideways like most of 2015 did... I just don't know? But that really doesn't make too much sense to me with the downside FP I have on the ES Futures that is below the March, 2020 lows. I do think it is real and will be hit this year. But first we must let this market top out and right now it's refusing to do so. Any move down from here should again just be a pullback of some degree.

I'm leaning toward the 3-5% one as it would then make a higher low then the recent 3720's one, and would still be supported by the rising green trendline from the March lows last year. It would further support the idea of it being a large wave 1 up from that 3/4 low to the highs last night, and the pullback being a large wave 2 down. It sets up the market for a large 3,4 and 5 up next... which would go into April of course. Those waves should be able to push the market up into Peters 4100+ target zone and complete some larger degree wave 5 up. Once done I think it's ALL done... meaning all the waves up from the March, 2020 low.

As for the short term, I don't have much to say. It looks quite overbought here and could start a move down anytime. But we all know how choppy it is in the early stages, so this could continue all week and then start the 3-5% move down next week. This is options expiration week and we should all be aware of how much it's manipulated to make the most calls and puts expire worthless. 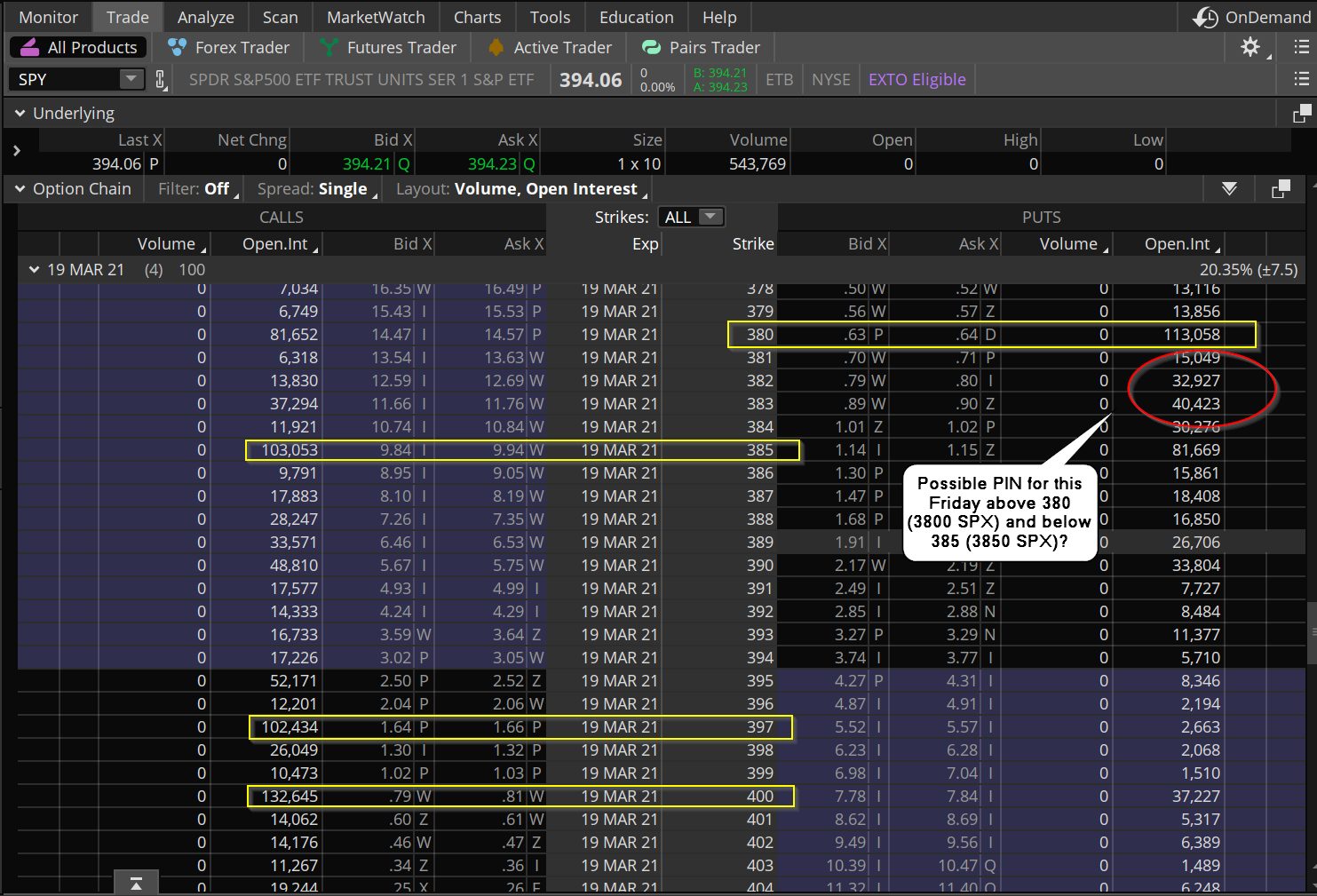