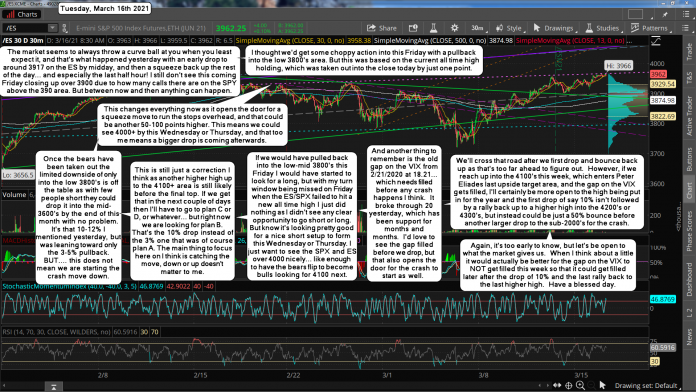 The market seems to always throw a curve ball at you when you least expect it, and that's what happened yesterday with an early drop to around 3917 on the ES by midday, and then a squeeze back up the rest of the day... and especially the last half hour! I still don't see this coming Friday closing up over 3900 due to how many calls there are on the SPY above the 390 area. But between now and then anything can happen.

I thought we'd get some choppy action into this Friday with a pullback into the low 3800's area. But this was based on the current all time high holding, which was taken out into the close today by just one point.

This changes everything now as it opens the door for a squeeze move to run the stops overhead, and that could be another 50-100 points higher. This means we could see 4000+ by this Wednesday or Thursday, and that too me means a bigger drop is coming afterwards.

Once the bears have been taken out the limited downside of only into the low 3800's is off the table as with few people short they could drop it into the mid-3600's by the end of this month with no problem. It's that 10-12% I mentioned yesterday, but was leaning toward only the 3-5% pullback. BUT.... this does not mean we are starting the crash move down.

This is still just a correction I think as another higher high up to the 4100+ area is still likely before the final top. If we get that in the next couple of days then I'll have to go to plan C or D, or whatever... but right now we are looking for plan B. That's the 10% drop instead of the 3% one that was of course plan A. The main thing to focus here on I think is catching the move, down or up doesn't matter to me.

If we would have pulled back into the low-mid 3800's this Friday I would have started to look for a long, but with my turn window being missed on Friday when the ES/SPX failed to hit a new all time high I just did nothing as I didn't see any clear opportunity to go short or long. But know it's looking pretty good for a nice short setup to form this Wednesday or Thursday. I just want to see the SPX and ES over 4000 nicely... like enough to have the bears flip to become bulls looking for 4100 next. 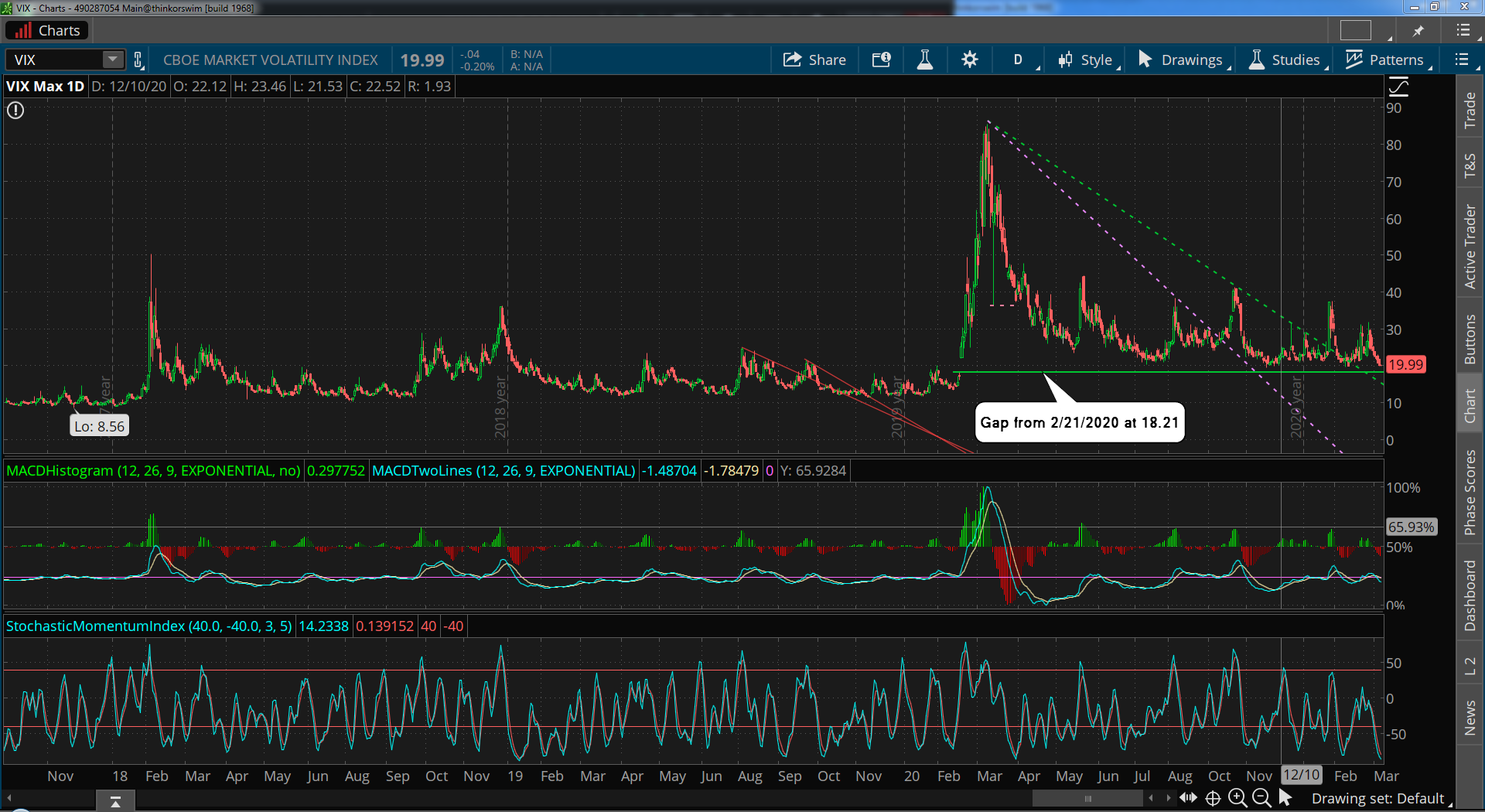 And another thing to remember is the old gap on the VIX from 2/21/2020 at 18.21... which needs filled before any crash happens I think.  It broke through 20 yesterday, which has been support for months and months.  I'd love to see the gap filled before we drop, but that also opens the door for the crash to start as well.

We'll cross that road after we first drop and bounce back up as that's too far ahead to figure out.  However, if we reach up into the 4100's this week, which enters Peter Eliades last upside target area, and the gap on the VIX gets filled, I'll certainly be more open to the high being put in for the year and the first drop of say 10% isn't followed by a rally back up to a higher high into the 4200's or 4300's, but instead could be just a 50% bounce before another larger drop to the sub-2000's for the crash.

Again, it's too early to know, but let's be open to what the market gives us.  When I think about a little it would actually be better for the gap on the VIX to NOT get filled this week so that it could get filled later after the drop of 10% and the last rally back to the last higher high.  Have a blessed day.