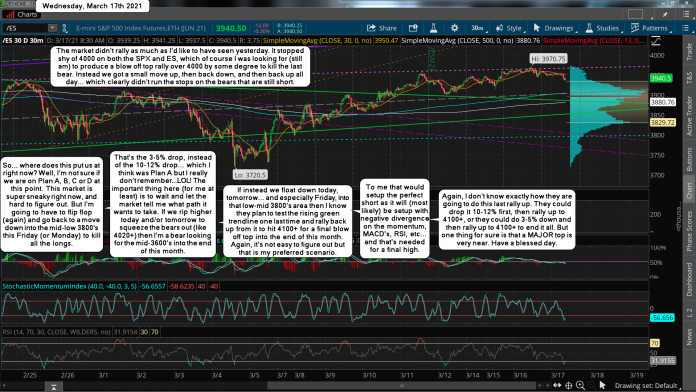 The market didn't rally as much as I'd like to have seen yesterday. It stopped shy of 4000 on both the SPX and ES, which of course I was looking for (still am) to produce a blow off top rally over 4000 by some degree to kill the last bear. Instead we got a small move up, then back down, and then back up all day... which clearly didn't run the stops on the bears that are still short.

So... where does this put us at right now? Well, I'm not sure if we are on Plan A, B, C or D at this point. This market is super sneaky right now, and hard to figure out. But I'm going to have to flip flop (again) and go back to a move down into the mid-low 3800's this Friday (or Monday) to kill all the longs.

That's the 3-5% drop, instead of the 10-12% drop... which I think was Plan A but I really don't remember...LOL! The important thing here (for me at least) is to wait and let the market tell me what path it wants to take. If we rip higher today and/or tomorrow to squeeze the bears out (like 4020+) then I'm a bear looking for the mid-3600's into the end of this month.

If instead we float down today, tomorrow... and especially Friday, into that low-mid 3800's area then I know they plan to test the rising green trendline one last time and rally back up from it to hit 4100+ for a final blow off top into the end of this month. Again, it's not easy to figure out but that is my preferred scenario.

To me that would setup the perfect short as it will (most likely) be setup with negative divergence on the momentum, MACD's, RSI, etc... and that's needed for a final high.

Here's a great video from Peter Eliades. He clearly explains how close we are to a MAJOR top that could be compared to the 1929 high (at least that the way I understood it).

Here's some my personal notes that wrote down from watching Peters videos...