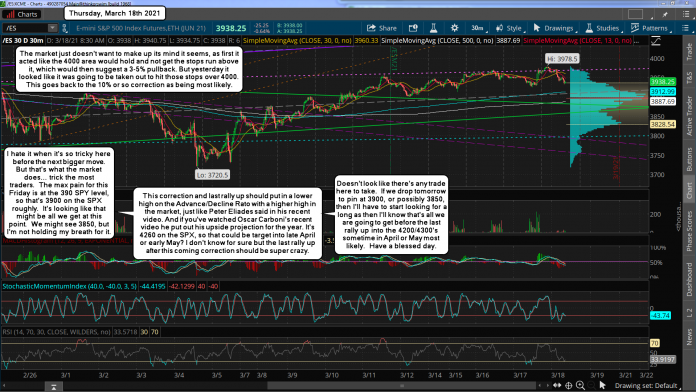 The market just doesn't want to make up its mind it seems, as first it acted like the 4000 area would hold and not get the stops run above it, which would then suggest a 3-5% pullback. But yesterday it looked like it was going to be taken out to hit those stops over 4000. This goes back to the 10% or so correction as being most likely.

I hate it when it's so tricky here before the next bigger move. But that's what the market does... trick the most traders.  The max pain for this Friday is at the 390 SPY level, so that's 3900 on the SPX roughly.  It's looking like that might be all we get at this point.  We might see 3850, but I'm not holding my breath for it.

This correction and last rally up should put in a lower high on the Advance/Decline Rato with a higher high in the market, just like Peter Eliades said in his recent video. And if you've watched Oscar Carboni's recent video he put out his upside projection for the year. It's 4260 on the SPX, so that could be target into late April or early May? I don't know for sure but the last rally up after this coming correction should be super crazy.

Doesn't look like there's any trade here to take.  If we drop tomorrow to pin at 3900, or possibly 3850, then I'll have to start looking for a long as then I'll know that's all we are going to get before the last rally up into the 4200/4300's sometime in April or May most likely.  Have a blessed day.