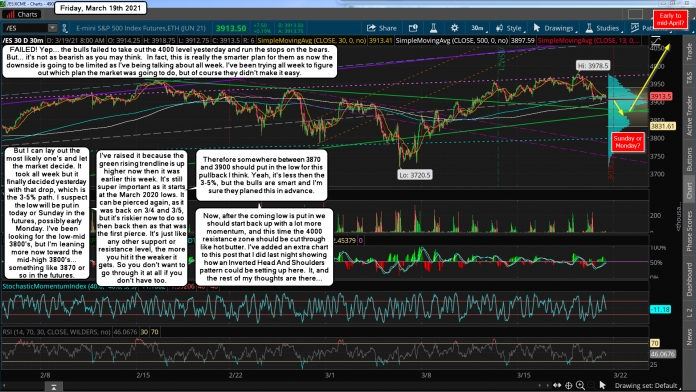 FAILED! Yep... the bulls failed to take out the 4000 level yesterday and run the stops on the bears. But... it's not as bearish as you may think.  In fact, this is really the smarter plan for them as now the downside is going to be limited as I've being talking about all week. I've been trying all week to figure out which plan the market was going to do, but of course they didn't make it easy.

But I can lay out the most likely one's and let the market decide. It took all week but it finally decided yesterday with that drop, which is the 3-5% path. I suspect the low will be put in today or Sunday in the futures, possibly early Monday. I've been looking for the low-mid 3800's, but I'm leaning more now toward the mid-high 3800's... something like 3870 or so in the futures.

I've raised it because the green rising trendline is up higher now then it was earlier this week. It's still super important as it starts at the March 2020 lows. It can be pierced again, as it was back on 3/4 and 3/5, but it's riskier now to do so then back then as that was the first pierce. It's just like any other support or resistance level, the more you hit it the weaker it gets. So you don't want to go through it at all if you don't have too.

Therefore somewhere between 3870 and 3900 should put in the low for this pullback I think. Yeah, it's less then the 3-5%, but the bulls are smart and I'm sure they planed this in advance.

Now, after the coming low is put in we should start back up with a lot more momentum, and this time the 4000 resistance zone should be cut through like hot butter. I did this chart last night showing how an Inverted Head And Shoulders pattern could be setting up here. 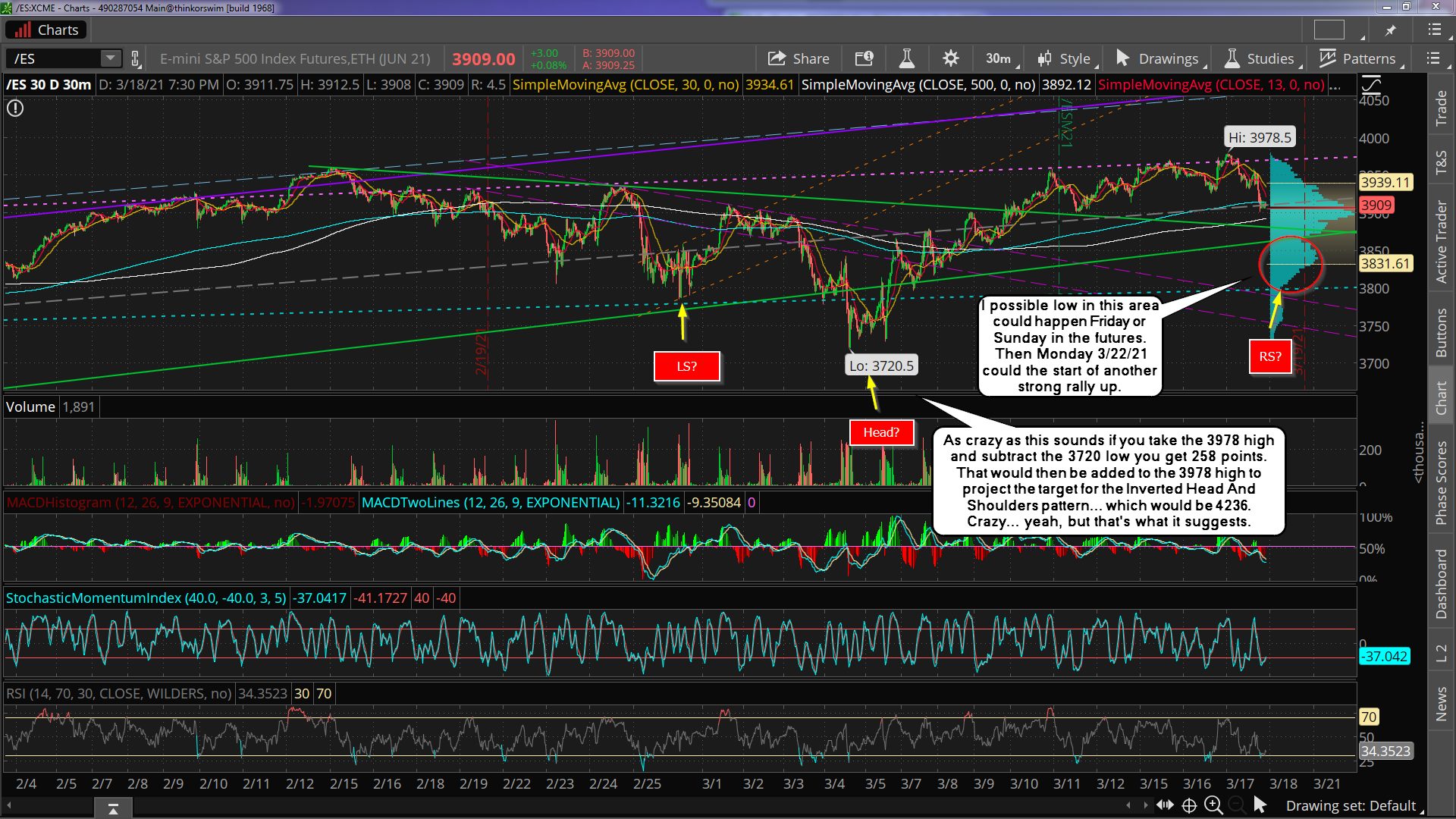 If so, and I do think the odds here favor the bulls, then the rally up from it targets 4236 on the ES Future. Time frame is unknown but it could do it in 2 weeks if it just follows the same time line from the 3/4 low to the 3/17 high, as that's 13 calendar days. This means we could top out into early April, and that target is very close to Oscar Carboni's 2021 target high, which his OMNI calculates for him.

I've followed his forecasts for 10+ years and I think it was only wrong 1 time out of the last 13 years since he started it. Pretty good record if you ask me. Normally his targets seem to be hit late in the year, so it would be odd to see it hit early. But if it does then I think even he will get bearish (he's known to be a diehard bull).

That target is 4260 on the SPX, so we need to NOT get super bullish up at that level if it hits sometime in April. Of course that will also fulfill Peter Eliades upside projections of 4103-4314 on the SPX, and the DOW has already entered its projection window of 33,195-36,524 already. Truly there's not going to be anything left on the upside if this plays out and we hit the 4200+ level into early April.

The great crash should follow.  Have a great weekend.