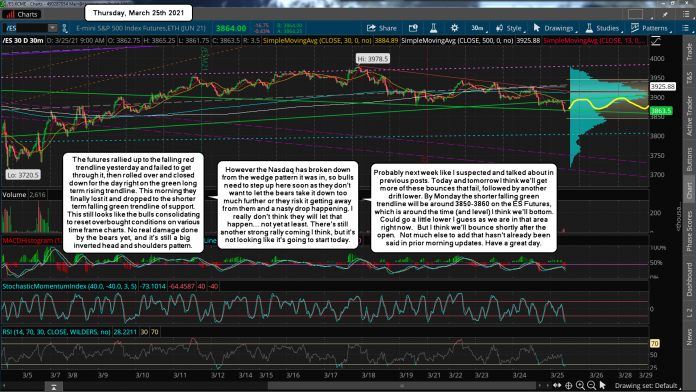 The futures rallied up to the falling red trendline yesterday and failed to get through it, then rolled over and closed down for the day right on the green long term rising trendline. This morning they finally lost it and dropped to the shorter term falling green trendline of support. This still looks like the bulls consolidating to reset overbought conditions on various time frame charts. No real damage done by the bears yet, and it's still a big inverted head and shoulders pattern.

However the Nasdaq has broken down from the wedge pattern it was in, so bulls need to step up here soon as they don't want to let the bears take it down too much further or they risk it getting away from them and a nasty drop happening. I really don't think they will let that happen... not yet at least. There's still another strong rally coming I think, but it's not looking like it's going to start today.

Probably next week like I suspected and talked about in previous posts. Today and tomorrow I think we'll get more of these bounces that fail, followed by another drift lower. By Monday the shorter falling green trendline will be around 3850-3860 on the ES Futures, which is around the time (and level) I think we'll bottom. Could go a little lower I guess as we are in that area right now.  But I think we'll bounce shortly after the open.  Not much else to add that hasn't already been said in prior morning updates. Have a great day.