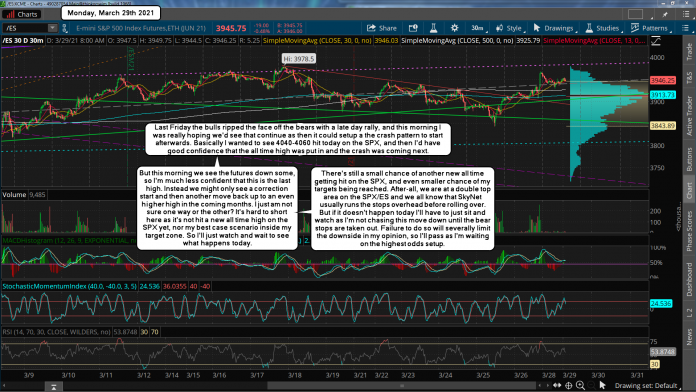 Last Friday the bulls ripped the face off the bears with a late day rally, and this morning I was really hoping we'd see that continue as then it could setup a the crash pattern to start afterwards. Basically I wanted to see 4040-4060 hit today on the SPX, and then I'd have good confidence that the all time high was put in and the crash was coming next.

But this morning we see the futures down some, so I'm much less confident that this is the last high. Instead we might only see a correction start and then another move back up to an even higher high in the coming months. I just am not sure one way or the other? It's hard to short here as it's not hit a new all time high on the SPX yet, nor my best case scenario inside my target zone. So I'll just watch and wait to see what happens today.

There's still a small chance of another new all time getting hit on the SPX, and even smaller chance of my targets being reached. After-all, we are at a double top area on the SPX/ES and we all know that SkyNet usually runs the stops overhead before rolling over. But if it doesn't happen today I'll have to just sit and watch as I'm not chasing this move down until the bear stops are taken out. Failure to do so will severally limit the downside in my opinion, so I'll pass as I'm waiting on the highest odds setup.

On another note, here's Peter Eliades latest video. The top is certainly near according to his software. Have a blessed day.

FINALLY! A-D Divergence at new all-time highs on DJIA and S&P...Is this the final top??