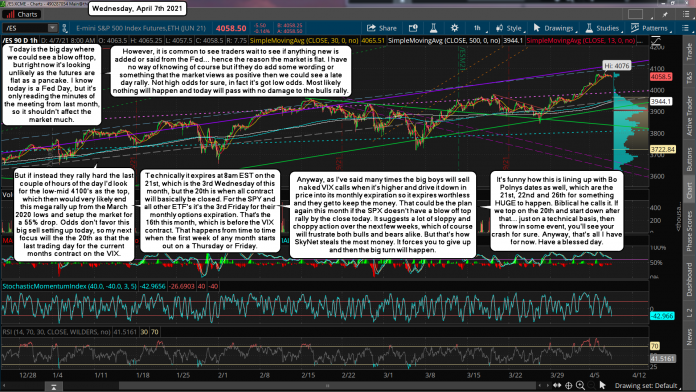 Today is the big day where we could see a blow off top, but right now it's looking unlikely as the futures are flat as a pancake. I know today is a Fed Day, but it's only reading the minutes of the meeting from last month, so it shouldn't affect the market much.

However, it is common to see traders wait to see if anything new is added or said from the Fed... hence the reason the market is flat. I have no way of knowing of course but if they do add some wording or something that the market views as positive then we could see a late day rally. Not high odds for sure, in fact it's got low odds. Most likely nothing will happen and today will pass with no damage to the bulls rally.

But if instead they rally hard the last couple of hours of the day I'd look for the low-mid 4100's as the top, which then would very likely end this mega rally up from the March 2020 lows and setup the market for a 55% drop. Odds don't favor this big sell setting up today, so my next focus will the the 20th as that the last trading day for the current months contract on the VIX.

Technically it expires at 8am EST on the 21st, which is the 3rd Wednesday of this month, but the 20th is when all contract will basically be closed. For the SPY and all other ETF's it's the 3rd Friday for their monthly options expiration. That's the 16th this month, which is before the VIX contract. That happens from time to time when the first week of any month starts out on a Thursday or Friday.

Anyway, as I've said many times the big boys will sell naked VIX calls when it's higher and drive it down in price into its monthly expiration so it expires worthless and they get to keep the money. That could be the plan again this month if the SPX doesn't have a blow off top rally by the close today. It suggests a lot of sloppy and choppy action over the next few weeks, which of course will frustrate both bulls and bears alike. But that's how SkyNet steals the most money. It forces you to give up and then the big turn will happen.

It's funny how this is lining up with Bo Polnys dates as well, which are the 21st, 22nd and 26th for something HUGE to happen. Biblical he calls it. If we top on the 20th and start down after that... just on a technical basis, then throw in some event, you'll see your crash for sure. Anyway, that's all I have for now. Have a blessed day.