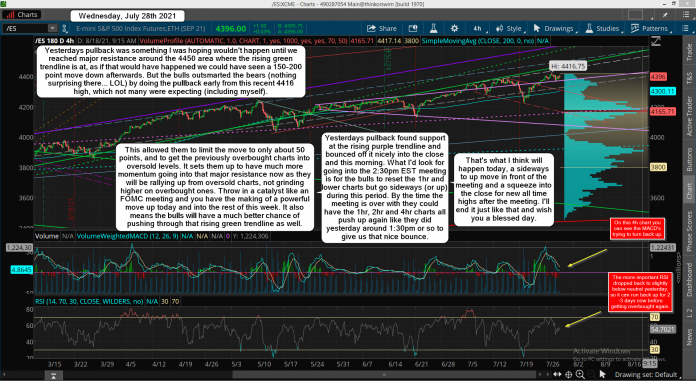 Yesterdays pullback was something I was hoping wouldn't happen until we reached major resistance around the 4450 area where the rising green trendline is at, as if that would have happened we could have seen a 150-200 point move down afterwards. But the bulls outsmarted the bears (nothing surprising there... LOL) by doing the pullback early from this recent 4416 high, which not many were expecting (including myself).

This allowed them to limit the move to only about 50 points, and to get the previously overbought charts into oversold levels. It sets them up to have much more momentum going into that major resistance now as they will be rallying up from oversold charts, not grinding higher on overbought ones. Throw in a catalyst like an FOMC meeting and you have the making of a powerful move up today and into the rest of this week. It also means the bulls will have a much better chance of pushing through that rising green trendline as well.

Yesterdays pullback found support at the rising purple trendline and bounced off it nicely into the close and this morning. What I'd look for going into the 2:30pm EST meeting is for the bulls to reset the 1hr and lower charts but go sideways (or up) during this period. By the time the meeting is over with they could have the 1hr, 2hr and 4hr charts all push up again like they did yesterday around 1:30pm or so to give us that nice bounce.

That's what I think will happen today, a sideways to up move in front of the meeting and a squeeze into the close for new all time highs after the meeting. I'll end it just like that and wish you a blessed day. 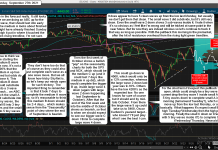 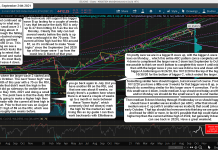 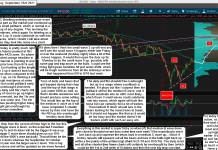