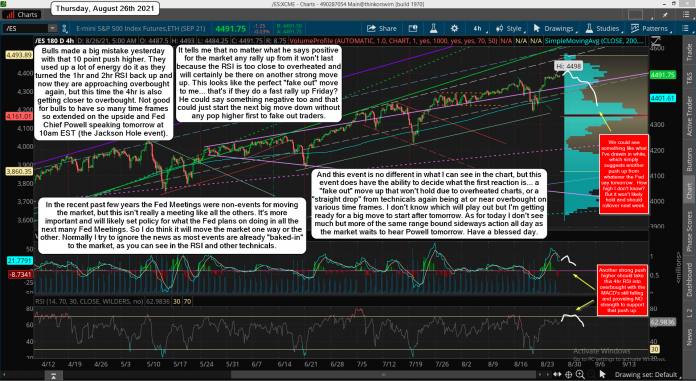 Bulls made a big mistake yesterday with that 10 point push higher. They used up a lot of energy do it as they turned the 1hr and 2hr RSI back up and now they are approaching overbought again, but this time the 4hr is also getting closer to overbought. Not good for bulls to have so many time frames so extended on the upside and Fed Chief Powell speaking tomorrow at 10am EST (the Jackson Hole event).

It tells me that no matter what he says positive for the market any rally up from it won't last because the RSI is too close to overheated and will certainly be there on another strong move up. This looks like the perfect "fake out" move to me... that's if they do a fast rally up Friday? He could say something negative too and that could just start the next big move down without any pop higher first to fake out traders.

In the recent past few years the Fed Meetings were non-events for moving the market, but this isn't really a meeting like all the others. It's more important and will likely set policy for what the Fed plans on doing in all the next many Fed Meetings. So I do think it will move the market one way or the other. Normally I try to ignore the news as most events are already "baked-in" to the market, as you can see in the RSI and other technicals.

And this event is no different in what I can see in the chart, but this event does have the ability to decide what the first reaction is... a "fake out" move up that won't hold due to overheated charts, or a "straight drop" from technicals again being at or near overbought on various time frames. I don't know which will play out but I'm getting ready for a big move to start after tomorrow. As for today I don't see much but more of the same range bound sideways action all day as the market waits to hear Powell tomorrow. Have a blessed day.