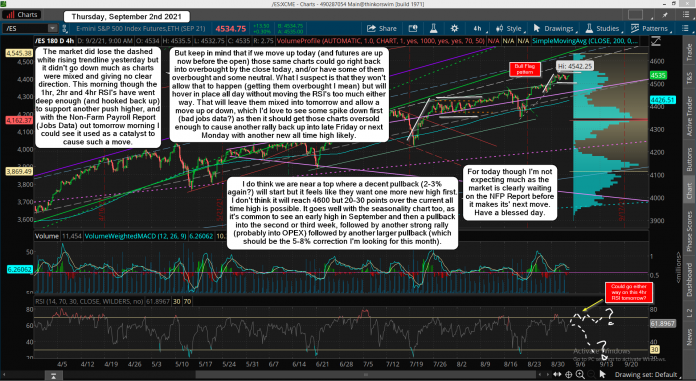 The market did lose the dashed white rising trendline yesterday but it didn't go down much as charts were mixed and giving no clear direction. This morning though the 1hr, 2hr and 4hr RSI's have went deep enough (and hooked back up) to support another push higher, and with the Non-Farm Payroll Report (Jobs Data) out tomorrow morning I could see it used as a catalyst to cause such a move.

But keep in mind that if we move up today (and futures are up now before the open) those same charts could go right back into overbought by the close today, and/or have some of them overbought and some neutral. What I suspect is that they won't allow that to happen (getting them overbought I mean) but will hover in place all day without moving the RSI's too much either way. That will leave them mixed into tomorrow and allow a move up or down, which I'd love to see some spike down first (bad jobs data?) as then it should get those charts oversold enough to cause another rally back up into late Friday or next Monday with another new all time high likely.

I do think we are near a top where a decent pullback (2-3% again?) will start but it feels like they want one more new high first. I don't think it will reach 4600 but 20-30 points over the current all time high is possible. It goes well with the seasonality chart too, as it's common to see an early high in September and then a pullback into the second or third week, followed by another strong rally (probably into OPEX) followed by another larger pullback (which should be the 5-8% correction I'm looking for this month).

For today though I'm not expecting much as the market is clearly waiting on the NFP Report before it makes its' next move. Have a blessed day.