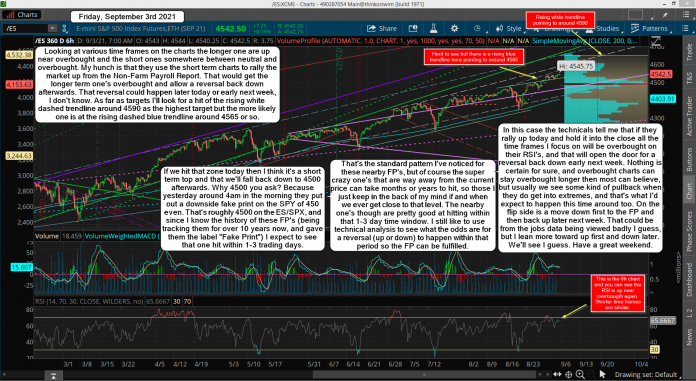 Looking at various time frames on the charts the longer one are up near overbought and the short ones somewhere between neutral and overbought. My hunch is that they use the short term charts to rally the market up from the Non-Farm Payroll Report. That would get the longer term one's overbought and allow a reversal back down afterwards. That reversal could happen later today or early next week, I don't know. As far as targets I'll look for a hit of the rising white dashed trendline around 4590 as the highest target but the more likely one is at the rising dashed blue trendline around 4565 or so.

If we hit that zone today then I think it's a short term top and that we'll fall back down to 4500 afterwards. Why 4500 you ask? Because yesterday around 4am in the morning they put out a downside fake print on the SPY of 450 even. That's roughly 4500 on the ES/SPX, and since I know the history of these FP's (being tracking them for over 10 years now, and gave them the label "Fake Print") I expect to see that one hit within 1-3 trading days.

That's the standard pattern I've noticed for these nearby FP's, but of course the super crazy one's that are way away from the current price can take months or years to hit, so those I just keep in the back of my mind if and when we ever get close to that level. The nearby one's though are pretty good at hitting within that 1-3 day time window. I still like to use technical analysis to see what the odds are for a reversal (up or down) to happen within that period so the FP can be fulfilled.

In this case the technicals tell me that if they rally up today and hold it into the close all the time frames I focus on will be overbought on their RSI's, and that will open the door for a reversal back down early next week. Nothing is certain for sure, and overbought charts can stay overbought longer then most can believe, but usually we see some kind of pullback when they do get into extremes, and that's what I'd expect to happen this time around too. On the flip side is a move down first to the FP and then back up later next week. That could be from the jobs data being viewed badly I guess, but I lean more toward up first and down later. We'll see I guess. Have a great weekend.