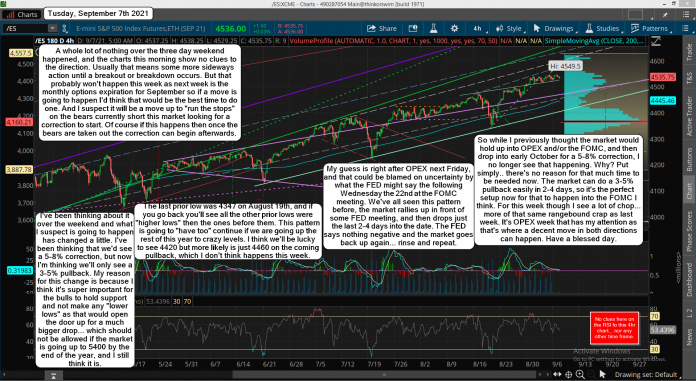 A whole lot of nothing over the three day weekend happened, and the charts this morning show no clues to the direction. Usually that means some more sideways action until a breakout or breakdown occurs. But that probably won't happen this week as next week is the monthly options expiration for September so if a move is going to happen I'd think that would be the best time to do one. And I suspect it will be a move up to "run the stops" on the bears currently short this market looking for a correction to start. Of course if this happens then once the bears are taken out the correction can begin afterwards.

I've been thinking about it over the weekend and what I suspect is going to happen has changed a little. I've been thinking that we'd see a 5-8% correction, but now I'm thinking we'll only see a 3-5% pullback. My reason for this change is because I think it's super important for the bulls to hold support and not make any "lower lows" as that would open the door up for a much bigger drop... which should not be allowed if the market is going up to 5400 by the end of the year, and I still think it is.

The last prior low was 4347 on August 19th, and if you go back you'll see all the other prior lows were "higher lows" then the ones before them. This pattern is going to "have too" continue if we are going up the rest of this year to crazy levels. I think we'll be lucky to see 4420 but more likely is just 4460 on the coming pullback, which I don't think happens this week.

My guess is right after OPEX next Friday, and that could be blamed on uncertainty by what the FED might say the following Wednesday the 22nd at the FOMC meeting. We've all seen this pattern before, the market rallies up in front of some FED meeting, and then drops just the last 2-4 days into the date. The FED says nothing negative and the market goes back up again... rinse and repeat.

So while I previously thought the market would hold up into OPEX and/or the FOMC, and then drop into early October for a 5-8% correction, I no longer see that happening. Why? Put simply.. there's no reason for that much time to be needed now. The market can do a 3-5% pullback easily in 2-4 days, so it's the perfect setup now for that to happen into the FOMC I think. For this week though I see a lot of chop... more of that same rangebound crap as last week. It's OPEX week that has my attention as that's where a decent move in both directions can happen. Have a blessed day.