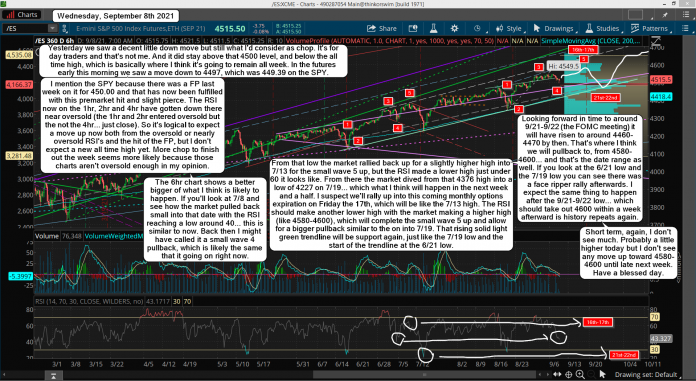 Yesterday we saw a decent little down move but still what I'd consider as chop. It's for day traders and that's not me. And it did stay above that 4500 level, and below the all time high, which is basically where I think it's going to remain all week. In the futures early this morning we saw a move down to 4497, which was 449.39 on the SPY.

I mention the SPY because there was a FP last week on it for 450.00 and that has now been fulfilled with this premarket hit and slight pierce. The RSI now on the 1hr, 2hr and 4hr have gotten down there near oversold (the 1hr and 2hr entered oversold but the not the 4hr... just close). So it's logical to expect a move up now both from the oversold or nearly oversold RSI's and the hit of the FP, but I don't expect a new all time high yet. More chop to finish out the week seems more likely because those charts aren't oversold enough in my opinion.

The 6hr chart shows a better bigger of what I think is likely to happen. If you'll look at 7/8 and see how the market pulled back small into that date with the RSI reaching a low around 40... this is similar to now. Back then I might have called it a small wave 4 pullback, which is likely the same that it going on right now.

From that low the market rallied back up for a slightly higher high into 7/13 for the small wave 5 up, but the RSI made a lower high just under 60 it looks like. From there the market dived from that 4376 high into a low of 4227 on 7/19... which what I think will happen in the next week and a half. I suspect we'll rally up into this coming monthly options expiration on Friday the 17th, which will be like the 7/13 high. The RSI should make another lower high with the market making a higher high (like 4580-4600), which will complete the small wave 5 up and allow for a bigger pullback similar to the on into 7/19. That rising solid light green trendline will be support again, just like the 7/19 low and the start of the trendline at the 6/21 low.

Short term, again, I don't see much. Probably a little higher today but I don't see any move up toward 4580-4600 until late next week. Have a blessed day.