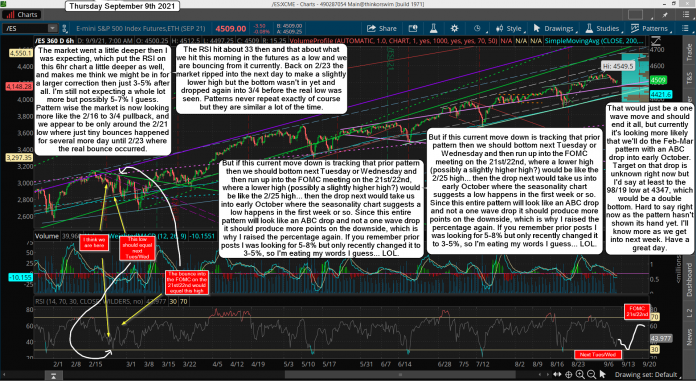 The market went a little deeper then I was expecting, which put the RSI on this 6hr chart a little deeper as well, and makes me think we might be in for a larger correction then just 3-5% after all. I'm still not expecting a whole lot more but possibly 5-7% I guess. Pattern wise the market is now looking more like the 2/16 to 3/4 pullback, and we appear to be only around the 2/21 low where just tiny bounces happened for several more day until 2/23 where the real bounce occurred.

The RSI hit about 33 then and that about what we hit this morning in the futures as a low and we are bouncing from it currently. Back on 2/23 the market ripped into the next day to make a slightly lower high but the bottom wasn't in yet and dropped again into 3/4 before the real low was seen. Patterns never repeat exactly of course but they are similar a lot of the time.

But if this current move down is tracking that prior pattern then we should bottom next Tuesday or Wednesday and then run up into the FOMC meeting on the 21st/22nd, where a lower high (possibly a slightly higher high?) would be like the 2/25 high... then the drop next would take us into early October where the seasonality chart suggests a low happens in the first week or so. Since this entire pattern will look like an ABC drop and not a one wave drop it should produce more points on the downside, which is why I raised the percentage again. If you remember prior posts I was looking for 5-8% but only recently changed it to 3-5%, so I'm eating my words I guess... LOL.

One of these patterns is likely to play out, which is either the one I discussed yesterday or this current one I'm talking about now. I should have a better idea which one by next week as if we continue dropping into Tuesday/Wednesday and are in the mid 4400's I'd favor this ABC drop into early October. But if we stay range-bound between 4550 and down to the current prior market low into next week then I'll favor a run up to 4580-4600 into next Friday and a drop into the FOMC meeting to hit that mid-400's area.

That would just be a one wave move and should end it all, but currently it's looking more likely that we'll do the Feb-Mar pattern with an ABC drop into early October. Target on that drop is unknown right now but I'd say at least to the 98/19 low at 4347, which would be a double bottom. Hard to say right now as the pattern hasn't shown its hand yet. I'll know more as we get into next week. Have a great day.