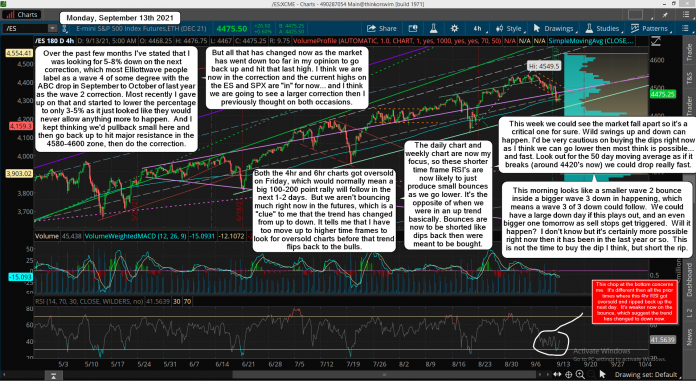 Over the past few months I've stated that I was looking for 5-8% down on the next correction, which most Elliottwave people label as a wave 4 of some degree with the ABC drop in September to October of last year as the wave 2 correction. Most recently I gave up on that and started to lower the percentage to only 3-5% as it just looked like they would never allow anything more to happen.  And I kept thinking we'd pullback small here and then go back up to hit major resistance in the 4580-4600 zone, then do the correction.

But all that has changed now as the market has went down too far in my opinion to go back up and hit that last high. I think we are now in the correction and the current highs on the ES and SPX are "in" for now... and I think we are going to see a larger correction then I previously thought on both occasions.

Both the 4hr and 6hr charts got oversold on Friday, which would normally mean a big 100-200 point rally will follow in the next 1-2 days.  But we aren't bouncing much right now in the futures, which is a "clue" to me that the trend has changed from up to down. It tells me that I have too move up to higher time frames to look for oversold charts before that trend flips back to the bulls.

The daily chart and weekly chart are now my focus, so these shorter time frame RSI's are now likely to just produce small bounces as we go lower. It's the opposite of when we were in an up trend basically. Bounces are now to be shorted like dips back then were meant to be bought.

This week we could see the market fall apart so it's a critical one for sure. Wild swings up and down can happen. I'd be very cautious on buying the dips right now as I think we can go lower then most think is possible... and fast. Look out for the 50 day moving average as if it breaks (around 4420's now) we could drop really fast.

This morning looks like a smaller wave 2 bounce inside a bigger wave 3 down in happening, which means a wave 3 of 3 down could follow.  We could have a large down day if this plays out, and an even bigger one tomorrow as sell stops get triggered.  Will it happen?  I don't know but it's certainly more possible right now then it has been in the last year or so.  This is not the time to buy the dip I think, but short the rip.