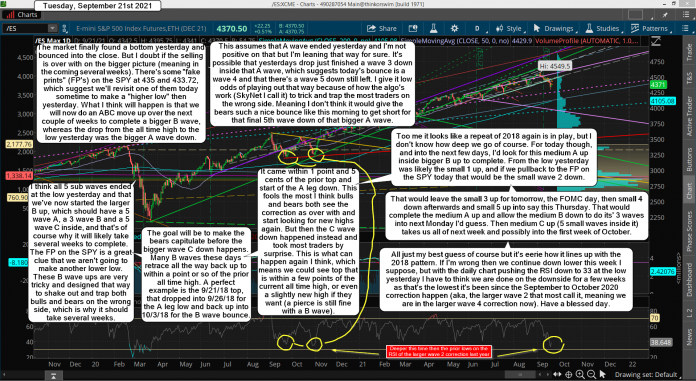 The market finally found a bottom yesterday and bounced into the close. But I doubt if the selling is over with on the bigger picture (meaning in the coming several weeks). There's some "fake prints" (FP's) on the SPY at 435 and 433.72, which suggest we'll revisit one of them today sometime to make a "higher low" then yesterday. What I think will happen is that we will now do an ABC move up over the next couple of weeks to complete a bigger B wave, whereas the drop from the all time high to the low yesterday was the bigger A wave down.

This assumes that A wave ended yesterday and I'm not positive on that but I'm leaning that way for sure. It's possible that yesterdays drop just finished a wave 3 down inside that A wave, which suggests today's bounce is a wave 4 and that there's a wave 5 down still left. I give it low odds of playing out that way because of how the algo's work (SkyNet I call it) to trick and trap the most traders on the wrong side. Meaning I don't think it would give the bears suggest a nice bounce like this morning to get short for that final 5th wave down of that bigger A wave. 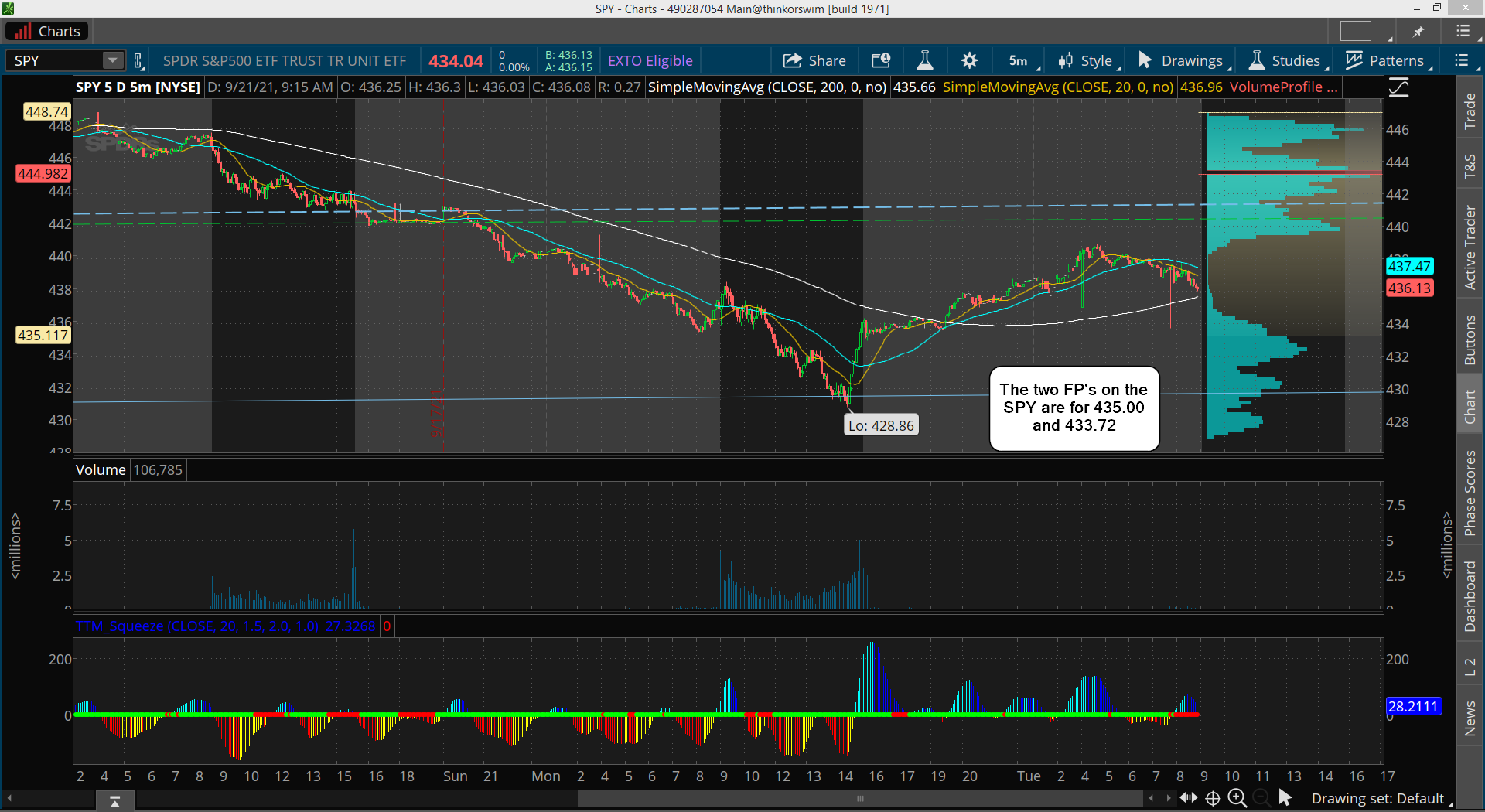 I think all 5 sub waves ended at the low yesterday and that we've now started the larger B up, which should have a 5 wave A, a 3 wave B and a 5 wave C inside, and that's of course why it will likely take several weeks to complete. The FP on the SPY is a great clue that we aren't going to make another lower low. These B wave ups are very tricky and designed that way to shake out and trap both bulls and bears on the wrong side, which is why it should take several weeks.

The goal will be to make the bears capitulate before the bigger wave C down happens. Many B waves these days retrace all the way back up to within a point or so of the prior all time high. A perfect example is the 9/21/18 top, that dropped into 9/26/18 for the A leg low and back up into 10/3/18 for the B wave bounce. 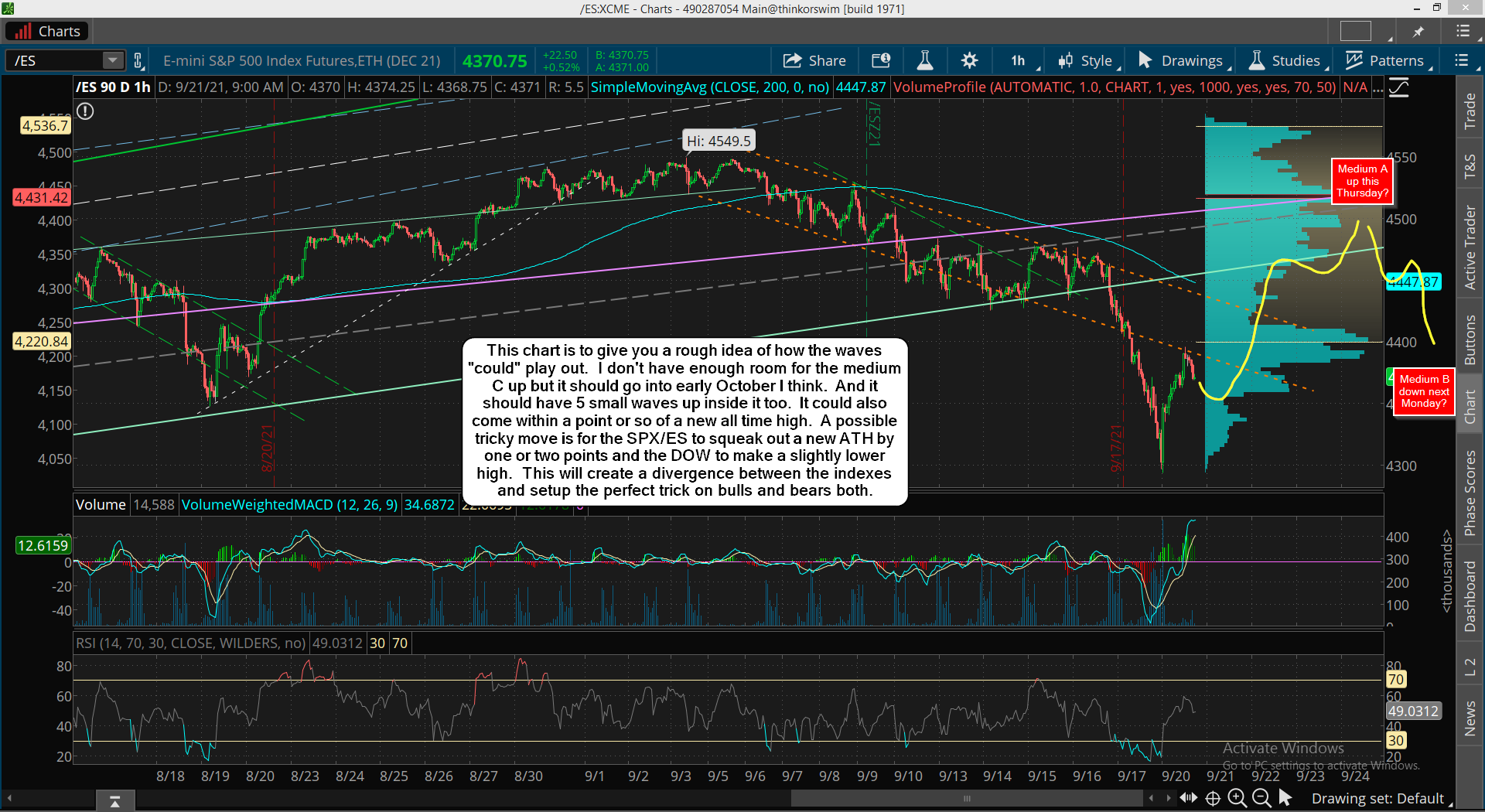 It came within 1 point and 5 cents of the prior top and start of the A leg down. This fools the most I think bulls and bears both see the correction as over with and start looking for new highs again. But then the C wave down happened instead and took most traders by surprise. This is what can happen again I think, which means we could see top that is within a few points of the current all time high, or even a slightly new high if they want (a pierce is still fine with a B wave).

Too me it looks like a repeat of 2018 again is in play, but I don't know how deep we go of course. For today though, and into the next few days, I'd look for this medium A up inside bigger B up to complete. From the low yesterday was likely the small 1 up, and if we pullback to the FP on the SPY today that would be the small wave 2 down.

That would leave the small 3 up for tomorrow, the FOMC day, then small 4 down afterwards and small 5 up into say this Thursday. That would complete the medium A up and allow the medium B down to do its' 3 waves into next Monday I'd guess. Then medium C up (5 small waves inside it) takes us all of next week and possibly into the first week of October.

All just my best guess of course but it's eerie how it lines up with the 2018 pattern. If I'm wrong then we continue down lower this week I suppose, but with the daily chart pushing the RSI down to 33 at the low yesterday I have to think we are done on the downside for a few weeks as that's the lowest it's been since the September to October 2020 correction happen (aka, the larger wave 2 that most call it, meaning we are in the larger wave 4 correction now). Have a blessed day.