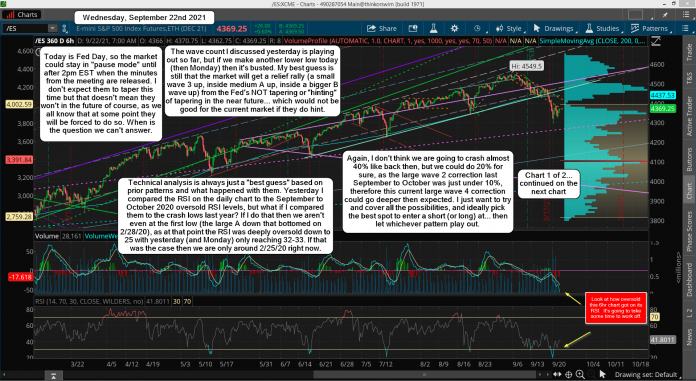 Today is Fed Day, so the market could stay in "pause mode" until after 2pm EST when the minutes from the meeting are released. I don't expect them to taper this time but that doesn't mean they won't in the future of course, as we all know that at some point they will be forced to do so. When is the question we can't answer.

The wave count I discussed yesterday is playing out so far, but if we make another lower low today (then Monday) then it's busted. My best guess is still that the market will get a relief rally (a small wave 3 up, inside medium A up, inside a bigger B wave up) from the Fed's NOT tapering or "hinting" of tapering in the near future... which would not be good for the current market if they do hint.

Technical analysis is always just a "best guess" based on prior patterns and what happened with them. Yesterday I compared the RSI on the daily chart to the September to October 2020 oversold RSI levels, but what if I compared them to the crash lows last year? If I do that then we aren't even at the first low (the large A down that bottomed on 2/28/20), as at that point the RSI was deeply oversold down to 25 with yesterday (and Monday) only reaching 32-33. If that was the case then we are only around 2/25/20 right now.

Again, I don't think we are going to crash almost 40% like back then, but we could do 20% for sure, as the large wave 2 correction last September to October was just under 10%, therefore this current large wave 4 correction could go deeper then expected. I just want to try and cover all the possibilities, and ideally pick the best spot to enter a short (or long) at... then let whichever pattern play out. 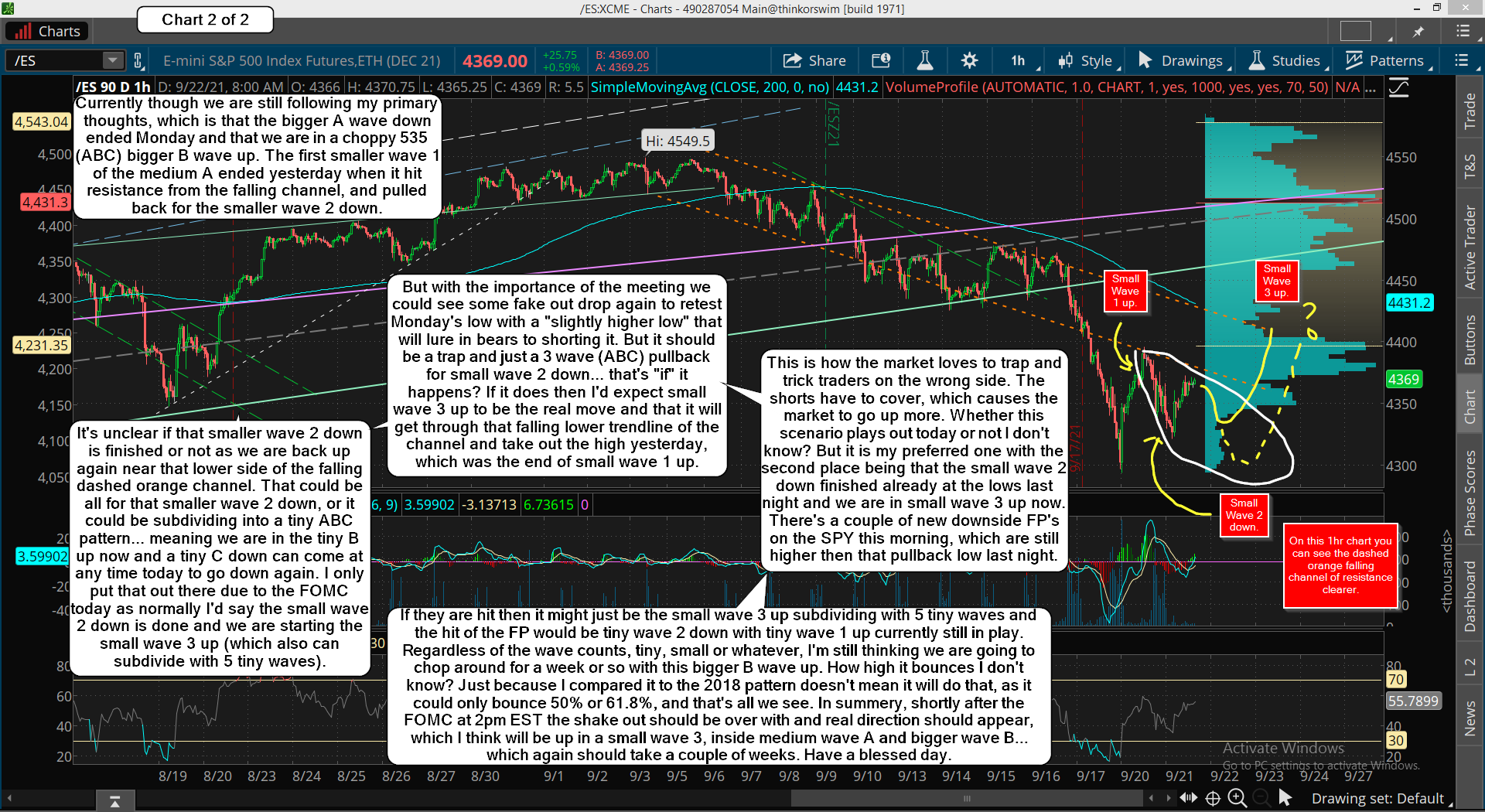 Currently though we are still following my primary thoughts, which is that the bigger A wave down ended Monday and that we are in a choppy 535 (ABC) bigger B wave up. The first smaller wave 1 of the medium A ended yesterday when it hit resistance from the falling channel, and pulled back for the smaller wave 2 down.

It's unclear if that smaller wave 2 down is finished or not as we are back up again near that lower side of the falling dashed orange channel. That could be all for that smaller wave 2 down, or it could be subdividing into a tiny ABC pattern... meaning we are in the tiny B up now and a tiny C down can come at any time today to go down again. I only put that out there due to the FOMC today as normally I'd say the small wave 2 down is done and we are starting the small wave 3 up (which also can subdivide with 5 tiny waves).

But with the importance of the meeting we could see some fake out drop again to retest Monday's low with a "slightly higher low" that will lure in bears to shorting it. But it should be a trap and just a 3 wave (ABC) pullback for small wave 2 down... that's "if" it happens? If it does then I'd expect small wave 3 up to be the real move and that it will get through that falling lower trendline of the channel and take out the high yesterday, which was the end of small wave 1 up.

This is how the market loves to trap and trick traders on the wrong side. The shorts have to cover, which causes the market to go up more. Whether this scenario plays out today or not I don't know? But it is my preferred one with the second place being that the small wave 2 down finished already at the lows last night and we are in small wave 3 up now. There's a couple of new downside FP's on the SPY this morning, which are still higher then that pullback low last night.

If they are hit then it might just be the small wave 3 up subdividing with 5 tiny waves and the hit of the FP would be tiny wave 2 down with tiny wave 1 up currently still in play. Regardless of the wave counts, tiny, small or whatever, I'm still thinking we are going to chop around for a week or so with this bigger B wave up. How high it bounces I don't know? Just because I compared it to the 2018 pattern doesn't mean it will do that, as it could only bounce 50% or 61.8%, and that's all we see. In summery, shortly after the FOMC at 2pm EST the shake out should be over with and real direction should appear, which I think will be up in a small wave 3, inside medium wave A and bigger wave B... which again should take a couple of weeks. Have a blessed day.