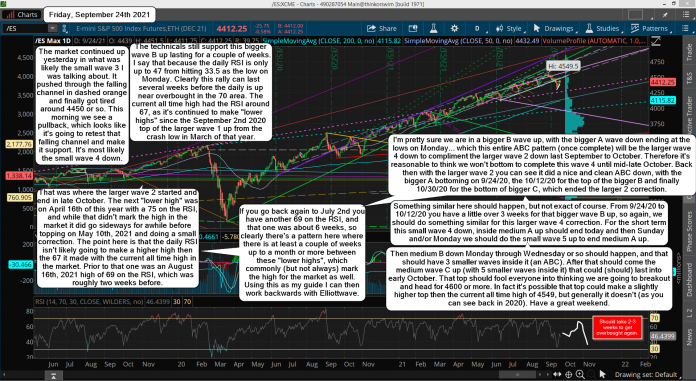 The technicals still support this bigger wave B up lasting for a couple of weeks. I say that because the daily RSI is only up to 47 from hitting 33.5 as the low on Monday. Clearly this rally can last several weeks before the daily is up near overbought in the 70 area. The current all time high had the RSI around 67, as it's continued to make "lower highs" since the September 2nd 2020 top of the larger wave 1 up from the crash low in March of that year.

That was where the larger wave 2 started and end in late October. The next "lower high" was on April 16th of this year with a 75 on the RSI, and while that didn't mark the high in the market it did go sideways for awhile before topping on May 10th, 2021 and doing a small correction. The point here is that the daily RSI isn't likely going to make a higher high then the 67 it made with the current all time high in the market. Prior to that one was an August 16th, 2021 high of 69 on the RSI, which was roughly two weeks before.

If you go back again to July 2nd you have another 69 on the RSI, and that one was about 6 weeks, so clearly there's a pattern here where there is at least a couple of weeks up to a month or more between these "lower highs", which commonly (but not always) mark the high for the market as well. Using this as my guide I can then work backwards with Elliottwave.

Something similar here should happen, but not exact of course. From 9/24/20 to 10/12/20 you have a little over 3 weeks for that bigger wave B up, so again, we should do something similar for this larger wave 4 correction. For the short term this small wave 4 down, inside medium A up should end today and then Sunday and/or Monday we should do the small wave 5 up to end medium A up.

Then medium B down Monday through Wednesday or so should happen, and that should have 3 smaller waves inside it (an ABC). After that should come the medium wave C up (with 5 smaller waves inside it) that could (should) last into early October. That top should fool everyone into thinking we are going to breakout and head for 4600 or more. In fact it's possible that top could make a slightly higher top then the current all time high of 4549, but generally it doesn't (as you can see back in 2020). Have a great weekend.