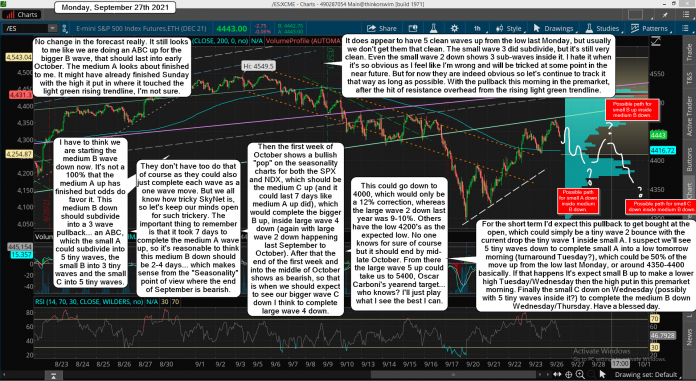 No change in the forecast really. It still looks to me like we are doing an ABC up for the bigger B wave, that should last into early October. The medium A looks about finished to me. It might have already finished Sunday with the high it put in where it touched the light green rising trendline, I'm not sure.

It does appear to have 5 clean waves up from the low last Monday, but usually we don't get them that clean. The small wave 3 did subdivide, but it's still very clean. Even the small wave 2 down shows 3 subwaves inside it. I hate it when it's so obvious as I feel like I'm wrong and will be tricked at some point in the near future. But for now they are indeed obvious so let's continue to track it that way as long as possible. With the pullback this morning in the premarket, after the hit of resistance overhead from the rising light green trendline.

They don't have too do that of course as they could also just complete each wave as a one wave move. But we all know how tricky SkyNet is, so let's keep our minds open for such trickery. The important thing to remember is that it took 7 days to complete the medium A wave up, so it's reasonable to think this medium B down should be 2-4 days... which makes sense from the "Seasonality" point of view where the end of September is bearish.

Then the first week of October shows a bullish "pop" on the seasonality charts for both the SPX and NDX, which should be the medium C up (and it could last 7 days like medium A up did), which would complete the bigger B up, inside large wave 4 down (again with large wave 2 down happening last September to October). After that the end of the first week and into the middle of October shows as bearish, so that is when we should expect to see our bigger wave C down I think to complete large wave 4 down.

This could go down to 4000, which would only be a 12% correction, whereas the large wave 2 down last year was 9-10%. Others have the low 4200's as the expected low. No one knows for sure of course but it should end by mid-late October. From there the large wave 5 up could take us to 5400, Oscar Carboni's yearend target... who knows? I'll just play what I see the best I can.

For the short term I'd expect this pullback to get bought at the open, which could simply be a tiny wave 2 bounce with the current drop the tiny wave 1 inside small A. I suspect we'll see 5 tiny waves down to complete small A into a low tomorrow morning (turnaround Tuesday?), which could be 50% of the move up from the low last Monday, or around 4350-4400 basically. If that happens It's expect small B up to make a lower high Tuesday/Wednesday then the high put in this premarket morning. Finally the small C down on Wednesday (possibly with 5 tiny waves inside it?) to complete the medium B down Wednesday/Thursday. Have a blessed day.