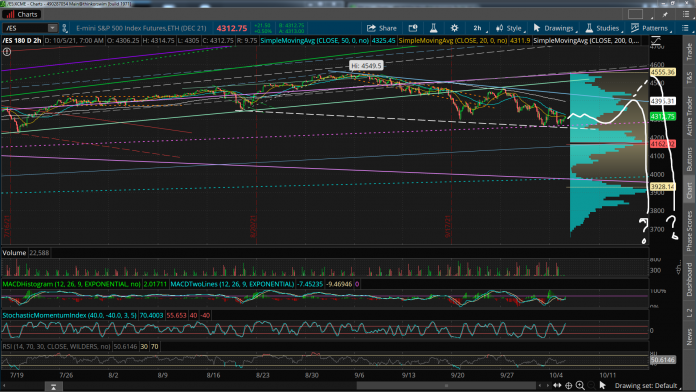 Yesterday failed to hold the rally up that started Sunday night and dropped early in the day to find support around the low last Thursday. Then it went sideways in a choppy range the rest of the day to create a nice bear flag pattern.

Unfortunately for the bears they did not take advantage of it and drop it after hours last night... nor this morning. Instead we see the bulls trying to breakaway here in the premarket with a small rally up. I dont' think they will do a whole lot today and maybe not tomorrow either, but if they can just hold above the current lows for 2-3 days they will reset the short term charts enough I think to get a real rally going. My guess is that into next week (remember that next Friday is the monthly OPEX) they grind this higher with targets of the falling light blue trendline of resistance and rising purple trendline.

Also the light green rising trendline as well, but it will likely hit the rising purple one soon and just be double resistance. Regardless of which trendline stops the market there does appear to be a rally trying to setup. Bears have a few more days I think but after this Thursday if they haven't taken out the current double bottom lows then odds will shift nicely to the bulls.

For those of you that have been around long enough you'll remember Mr. TopStep "Danny Riley" always quoting "The Pit Bull" (Marty Schwartz)... "The market tends to make the low on the Thursday or Friday of the second week of the month". He was correct a lot of the time... not always of course. So that door for another retest of the current double bottom area from yesterday and last Thursday is still open going into the end of this week.

If the bears break it down through that support zone then we are likely going to drop very hard. But if they don't (and I don't think they will) we should chop around this low area for a few more days and then have a nice rally into early to mid next week. This will be the best shot to short this pig for a very large drop to follow. It will be the C wave in Elliottwave and it will be ugly. I'm still on my back up computer as I'm waiting on a part. I'll do more notations on the chart whenever I get it back up late this week. Have a blessed day... and be on the lookout for surprises. 🙂 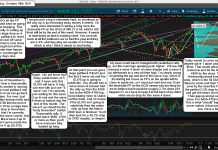