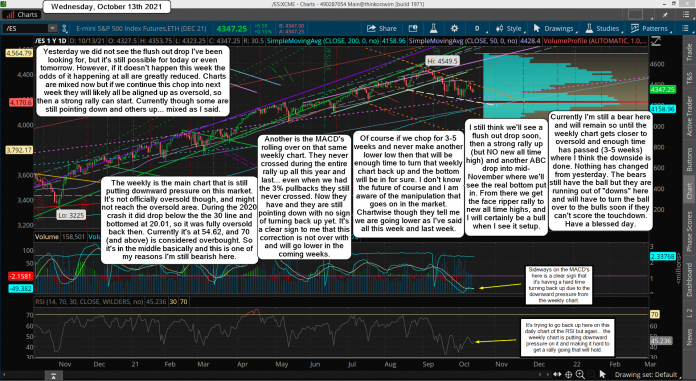 Yesterday we did not see the flush out drop I've been looking for, but it's still possible for today or even tomorrow. However, if it doesn't happen this week the odds of it happening at all are greatly reduced. Charts are mixed now but if we continue this chop into next week they will likely all be aligned up as oversold, so then a strong rally can start. Currently though some are still pointing down and others up... mixed as I said.

The weekly is the main chart that is still putting downward pressure on this market. It's not officially oversold though, and might not reach the oversold area. During the 2020 crash it did drop below the the 30 line and bottomed at 20.01, so it was fully oversold back then. Currently it's at 54.62, and 70 (and above) is considered overbought. So it's in the middle basically and this is one of my reasons I'm still bearish here.

Another is the MACD's rolling over on that same weekly chart. They never crossed during the entire rally up all this year and last... even when we had the 3% pullbacks they still never crossed. Now they have and they are still pointing down with no sign of turning back up yet. It's a clear sign to me that this correction is not over with and will go lower in the coming weeks.

Of course if we chop for 3-5 weeks and never make another lower low then that will be enough time to turn that weekly chart back up and the bottom will be in for sure. I don't know the future of course and I am aware of the manipulation that goes on in the market. Chartwise though they tell me we are going lower as I've said all this week and last week.

I still think we'll see a flush out drop soon, then a strong rally up (but NO new all time high) and another ABC drop into mid-November where we'll see the real bottom put in. From there we get the face ripper rally to new all time highs, and I will certainly be a bull when I see it setup.

Currently I'm still a bear here and will remain so until the weekly chart gets closer to oversold and enough time has passed (3-5 weeks) where I think the downside is done. Nothing has changed from yesterday. The bears still have the ball but they are running out of "downs" here and will have to turn the ball over to the bulls soon if they can't score the touchdown. Have a blessed day. 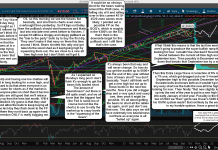