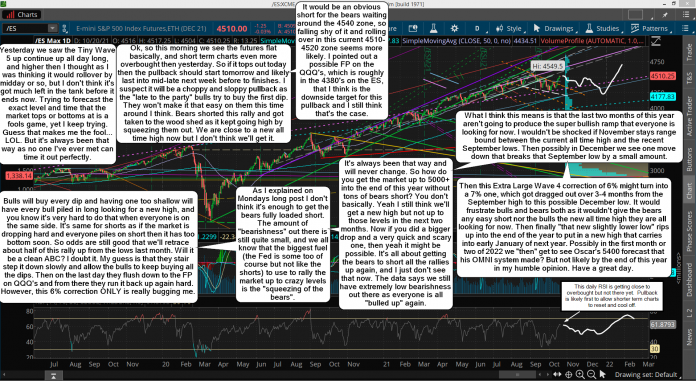 Yesterday we saw the Tiny Wave 5 up continue up all day long, and higher then I thought as I was thinking it would rollover by midday or so, but I don't think it's got much left in the tank before it ends now. Trying to forecast the exact level and time that the market tops or bottoms at is a fools game, yet I keep trying. Guess that makes me the fool... LOL. But it's always been that way as no one I've ever met can time it out perfectly.

Ok, so this morning we see the futures flat basically, and short term charts even more overbought then yesterday. So if it tops out today then the pullback should start tomorrow and likely last into mid-late next week before to finishes. I suspect it will be a choppy and sloppy pullback as the "late to the party" bulls try to buy the first dip. They won't make it that easy on them this time around I think. Bears shorted this rally and got taken to the wood shed as it kept going high by squeezing them out. We are close to a new all time high now but I don't think we'll get it.

It would be an obvious short for the bears waiting around the 4540 zone, so falling shy of it and rolling over in this current 4510-4520 zone seems more likely. I pointed out a possible FP on the QQQ's, which is roughly in the 4380's on the ES, that I think is the downside target for this pullback and I still think that's the case.

Bulls will buy every dip and having one too shallow will have every bull piled in long looking for a new high, and you know it's very hard to do that when everyone is on the same side. It's same for shorts as if the market is dropping hard and everyone piles on short then it has too bottom soon. So odds are still good that we'll retrace about half of this rally up from the lows last month. Will it be a clean ABC? I doubt it. My guess is that they stair step it down slowly and allow the bulls to keep buying all the dips. Then on the last day they flush down to the FP on QQQ's and from there they run it back up again hard. However, this 6% correction ONLY is really bugging me.

As I explained on Mondays long post I don't think it's enough to get the bears fully loaded short. The amount of "bearishness" out there is still quite small, and we all know that the biggest fuel (the Fed is some too of course but not like the shorts) to use to rally the market up to crazy levels is the "squeezing of the bears".

It's always been that way and will never change. So how do you get the market up to 5000+ into the end of this year without tons of bears short? You don't basically. Yeah I still think we'll get a new high but not up to those levels in the next two months. Now if you did a bigger drop and a very quick and scary one, then yeah it might be possible. It's all about getting the bears to short all the rallies up again, and I just don't see that now. The data says we still have extremely low bearishness out there as everyone is all "bulled up" again.

What I think this means is that the last two months of this year aren't going to produce the super bullish ramp that everyone is looking for now. I wouldn't be shocked if November stays range bound between the current all time high and the recent September lows. Then possibly in December we see one move down that breaks that September low by a small amount.

Then this Extra Large Wave 4 correction of 6% might turn into a 7% one, which got dragged out over 3-4 months from the September high to this possible December low. It would frustrate bulls and bears both as it wouldn't give the bears any easy short nor the bulls the new all time high they are all looking for now. Then finally "that new slightly lower low" rips up into the end of the year to put in a new high that carries into early January of next year. Possibly in the first month or two of 2022 we "then" get to see Oscar's 5400 forecast that his OMNI system made? But not likely by the end of this year in my humble opinion. Have a great day.