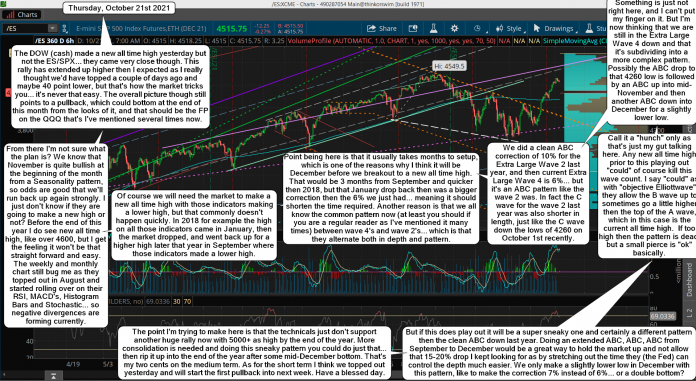 The DOW (cash) made a new all time high yesterday but not the ES/SPX... they came very close though. This rally has extended up higher then I expected as I really thought we'd have topped a couple of days ago and maybe 40 point lower, but that's how the market tricks you... it's never that easy. The overall picture though still points to a pullback, which could bottom at the end of this month from the looks of it, and that should be the FP on the QQQ that's I've mentioned several times now.

From there I'm not sure what the plan is? We know that November is quite bullish at the beginning of the month from a Seasonality pattern, so odds are good that we'll run back up again strongly. I just don't know if they are going to make a new high or not? Before the end of this year I do see new all time high, like over 4600, but I get the feeling it won't be that straight forward and easy. The weekly and monthly chart still bug me as they topped out in August and started rolling over on their RSI, MACD's, Histogram Bars and Stochastic... so negative divergences are forming currently.

Point being here is that it usually takes months to setup, which is one of the reasons why I think it will be December before we breakout to a new all time high. That would be 3 months from September and quicker then 2018, but that January drop back then was a bigger correction then the 6% we just had... meaning it should shorten the time required. Another reason is that we all know the common pattern now (at least you should if you are a regular reader as I've mentioned it many times) between wave 4's and wave 2's... which is that they alternate both in depth and pattern.

Something is just not right here, and I can't put my finger on it. But I'm now thinking that we are still in the Extra Large Wave 4 down and that it's subdividing into a more complex pattern. Possibly the ABC drop to that 4260 low is followed by an ABC up into mid-November and then another ABC down into December for a slightly lower low.

Call it a "hunch" only as that's just my gut talking here. Any new all time high prior to this playing out "could" of course kill this wave count. I say "could" as with "objective Elliottwave" they allow the B wave up to sometimes go a little higher then the top of the A wave, which in this case is the current all time high.  If too high then the pattern is dead, but a small pierce is "ok" basically.

But if this does play out it will be a super sneaky one and certainly a different pattern then the clean ABC down last year. Doing an extended ABC, ABC, ABC from September to December would be a great way to hold the market up and not allow that 15-20% drop I kept looking for as by stretching out the time they (the Fed) can control the depth much easier. We only make a slightly lower low in December with this pattern, like to make the correction 7% instead of 6%... or a double bottom?

The point I'm trying to make here is that the technicals just don't support another huge rally now with 5000+ as high by the end of the year. More consolidation is needed and doing this sneaky pattern you could do just that... then rip it up into the end of the year after some mid-December bottom. That's my two cents on the medium term. As for the short term I think we topped out yesterday and will start the first pullback into next week. Have a blessed day.