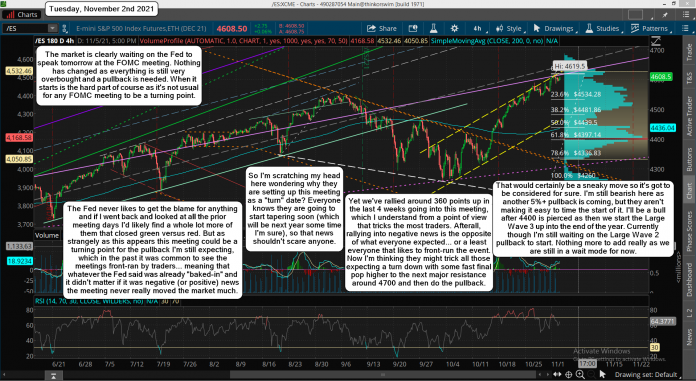 The market is clearly waiting on the Fed to speak tomorrow at the FOMC meeting. Nothing has changed as everything is still very overbought and a pullback is needed. When it starts is the hard part of course as it's not usual for any FOMC meeting to be a turning point.

The Fed never likes to get the blame for anything and if I went back and looked at all the prior meeting days I'd likely find a whole lot more of them that closed green versus red. But as strangely as this appears this meeting could be a turning point for the pullback I'm still expecting, which in the past it was common to see the meetings front-ran by traders... meaning that whatever the Fed said was already "baked-in" and it didn't matter if it was negative (or positive) news the meeting never really moved the market much.

So I'm scratching my head here wondering why they are setting up this meeting as a "turn" date? Everyone knows they are going to start tapering soon (which will be next year some time I'm sure), so that news shouldn't scare anyone.

Yet we've rallied around 360 points up in the last 4 weeks going into this meeting, which I understand from a point of view that tricks the most traders. Afterall, rallying into negative news is the opposite of what everyone expected... or a least everyone that likes to front-run the event. Now I'm thinking they might trick all those expecting a turn down with some fast final pop higher to the next major resistance around 4700 and then do the pullback.

That would certainly be a sneaky move so it's got to be considered for sure. I'm still bearish here as another 5%+ pullback is coming, but they aren't making it easy to time the start of it. I'll be a bull after 4400 is pierced as then we start the Large Wave 3 up into the end of the year. Currently though I'm still waiting on the Large Wave 2 pullback to start. Nothing more to add really as we are still in a wait mode for now.