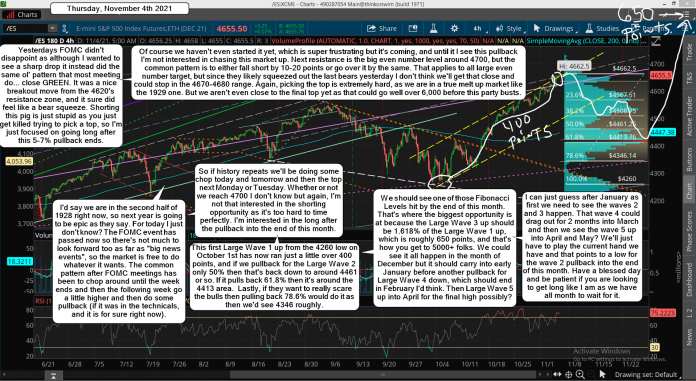 Yesterdays FOMC didn't disappoint as although I wanted to see a sharp drop it instead did the same ol' pattern that most meeting do... close GREEN. It was a nice breakout move from the 4620's resistance zone, and it sure did feel like a bear squeeze. Shorting this pig is just stupid as you just get killed trying to pick a top, so I'm just focused on going long after this 5-7% pullback ends.

Of course we haven't even started it yet, which is super frustrating but it's coming, and until it I see this pullback I'm not interested in chasing this market up. Next resistance is the big even number level around 4700, but the common pattern is to either fall short by 10-20 points or go over it by the same. That applies to all large even number target, but since they likely squeezed out the last bears yesterday I don't think we'll get that close and could stop in the 4670-4680 range. Again, picking the top is extremely hard, as we are in a true melt up market like the 1929 one. But we aren't even close to the final top yet as that could go well over 6,000 before this party busts.

I'd say we are in the second half of 1928 right now, so next year is going to be epic as they say. For today I just don't know? The FOMC event has passed now so there's not much to look forward too as far as "big news events", so the market is free to do whatever it wants. The common pattern after FOMC meetings has been to chop around until the week ends and then the following week go a little higher and then do some pullback (if it was in the technicals, and it is for sure right now).

So if history repeats we'll be doing some chop today and tomorrow and then the top next Monday or Tuesday. Whether or not we reach 4700 I don't know but again, I'm not that interested in the shorting opportunity as it's too hard to time perfectly. I'm interested in the long after the pullback into the end of this month.

We should see one of those Fibonacci Levels hit by the end of this month. That's where the biggest opportunity is at because the Large Wave 3 up should be 1.618% of the Large Wave 1 up, which is roughly 650 points, and that's how you get to 5000+ folks. We could see it all happen in the month of December but it should carry into early January before another pullback for Large Wave 4 down, which should end in February I'd think. Then Large Wave 5 up into April for the final high possibly?

I can just guess after January as first we need to see the waves 2 and 3 happen. That wave 4 could drag out for 2 months into March and then we see the wave 5 up into April and May? We'll just have to play the current hand we have and that points to a low for the wave 2 pullback into the end of this month. Have a blessed day and be patient if you are looking to get long like I am as we have all month to wait for it.