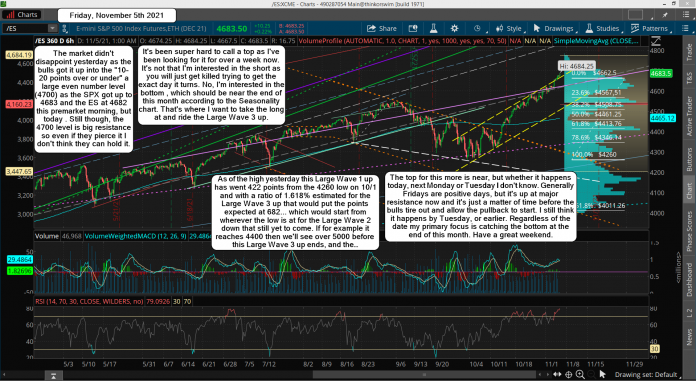 The market didn't disappoint yesterday as the bulls got it up into the "10-20 points over or under" a large even number level (4700) as the SPX got up to 4683 and the ES at 4682 this premarket morning, but today . Still though, the 4700 level is big resistance so even if they pierce it I don't think they can hold it.

It's been super hard to call a top as I've been looking for it for over a week now. It's not that I'm interested in the short as you will just get killed trying to get the exact day it turns. No, I'm interested in the bottom , which should be near the end of this month according to the Seasonality chart. That's where I want to take the long at and ride the Large Wave 3 up.

As of the high yesterday this Large Wave 1 up has went 422 points from the 4260 low on 10/1 and with a ratio of 1.618% estimated for the Large Wave 3 up that would put the points expected at 682... which would start from wherever the low is at for the Large Wave 2 down that still yet to come. If for example it reaches 4400 then we'll see over 5000 before this Large Wave 3 up ends, and the Seasonality for it is to happen into mid-January is perfect. It's truly going to be a face-ripper after it starts.

The top for this more is near, but whether it happens today, next Monday or Tuesday I don't know. Generally Fridays are positive days, but it's up at major resistance now and it's just a matter of time before the bulls tire out and allow the pullback to start. I still think it happens by Tuesday, or earlier. Regardless of the date my primary focus is catching the bottom at the end of this month. Have a great weekend.