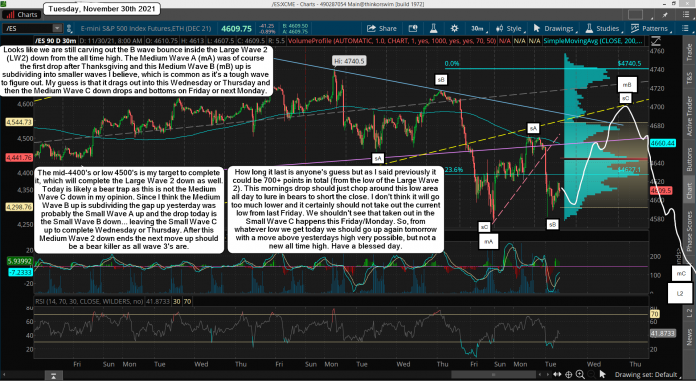 Looks like we are still carving out the B wave bounce inside the Large Wave 2 (LW2) down from the all time high. The Medium Wave A (mA) was of course the first drop after Thanksgiving and this Medium Wave B (mB) up is subdividing into smaller waves I believe, which is common as it's a tough wave to figure out. My guess is that it drags out into this Wednesday or Thursday and then the Medium Wave C down drops and bottoms on Friday or next Monday.

How long it last is anyone's guess but as I said previously it could be 700+ points in total (from the low of the Large Wave 2). This mornings drop should just chop around this low area all day to lure in bears to short the close. I don't think it will go too much lower and it certainly should not take out the current low from last Friday. We shouldn't see that taken out in the Small Wave C happens this Friday/Monday. So, from whatever low we get today we should go up again tomorrow with a move above yesterdays high very possible, but not a new all time high. Have a blessed day.