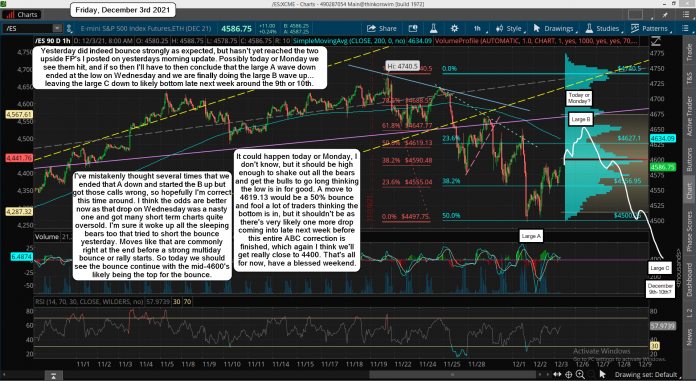 NOTE:  I've labeled the waves wrong.  They should all be Medium Waves, not Large Waves.  Sorry about that...

Yesterday did indeed bounce strongly as expected, but hasn't yet reached the two upside FP's I posted on yesterdays morning update. Possibly today or Monday we see them hit, and if so then I'll have to then conclude that the large A wave down ended at the low on Wednesday and we are finally doing the large B wave up... leaving the large C down to likely bottom late next week around the 9th or 10th.

I've mistakenly thought several times that we ended that A down and started the B up but got those calls wrong, so hopefully I'm correct this time around. I think the odds are better now as that drop on Wednesday was a nasty one and got many short term charts quite oversold. I'm sure it woke up all the sleeping bears too that tried to short the bounce yesterday. Moves like that are commonly right at the end before a strong multiday bounce or rally starts. So today we should see the bounce continue with the mid-4600's likely being the top for the bounce.

It could happen today or Monday, I don't know, but it should be high enough to shake out all the bears and get the bulls to go long thinking the low is in for good. A move to 4619.13 would be a 50% bounce and fool a lot of traders thinking the bottom is in, but it shouldn't be as there's very likely one more drop coming into late next week before this entire ABC correction is finished, which again I think we'll get really close to 4400. That's all for now, have a blessed weekend.