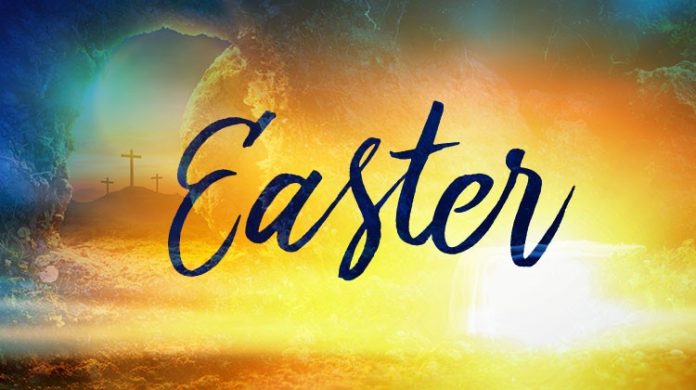 Are We Going To CRASH Into Easter?

Many different people predicting that we do...

We have the X22 Report talking about Qanon and how his posts (https://qanon.pub/) has all come true and weirdly some of them are made as much as a year in advance. Now I've known about Qanon since early 2017, back when he came out on a website called 4chan, but now it's 8chan (https://8kun.top/index.html)... but I never really posted about him much as everything was just conspiracy talk that was centered around politics, and nothing really related to the stock market.

But currently this shutdown we are having is related to some of the warnings that Qanon said was coming. Put simply, Trump is planning to do mass arrests of tens of thousands of satanists criminal pedophiles, and it's looking more and more likely to start around April 1st, 2020.

Trump even recently mentioned that he'd like to get the country running again by this coming Easter. In prior video's done by the X22 Report there's "10 Days Of Darkness" mentioned. This is expected from around April 1st to the 10th or 11th... into Easter.

Many speculate that this Qanon person is Trumps team of people and that they use the method to send messages out to the public that will listen, which are mostly Red Pill Takers, but when it's all over with everyone will wake up and see the truth behind the scenes of what these sick elites have been doing to children... and believe me, they won't be happy.

What I find interesting now is how how well timed this Corona Virus was created and released right during this month of late March to early April when Trump plans to do the mass arrests going into Easter. It's perfect to send a message to the satanists that God the father and Jesus his son are in full control here, and keep Trump protected so he can do what needs to be done.

It's also lines up perfect with a large ABC down move from the all time high to the expected low by April 21st or so. We are currently in the large B wave up and it should end by this coming Tuesday March 31th, 2020 or April 1st. Then the large C wave down happens as Bo Polny speaks of in his video.

It's downside target is around 15,000 on the DOW, and that's basically a pierce of the 2016 lows. On the SPX that's around the 1760 area, which again is a pierce of the 2016 lows. According to Bo this is expected to happen by April 21st (+/- 7 days). His calculations are done based on a megaphone pattern pointing to that area as the target, but time wise they are done from the Bible cycles.

It's a must watch video as there's no doubt that the Bible is 100% correct, but of course "interpreting it" isn't always perfect. Bo has been wrong in the past but who's to say he wasn't right and the deep state manipulated their way out of it that prior time event?  With all that's going on in the world currently, with the shutdowns and the corona virus I think Bo has a pretty good handle on the timeline right now.   We know they do everything possible to prevent what's coming, but this time around they can't, and Bo is spot on correct so far, which means I must listen and add his forecast and thought to my own.

Just from an Elliottwave point of view we know that most (not all) big declines happen in ABC wave patterns, and everyone that's ever traded the stock market can clearly see this rally up we are in right now looks like a large B wave. So a large C wave down does seem likely at some point soon.

And there's more things of concern that support an ABC move down (and Bo's thoughts into April 21st)... which are the large amount of crazy wildcard "puts" bought down in the 1000 area on the SPX, for the April 17th expiration date. 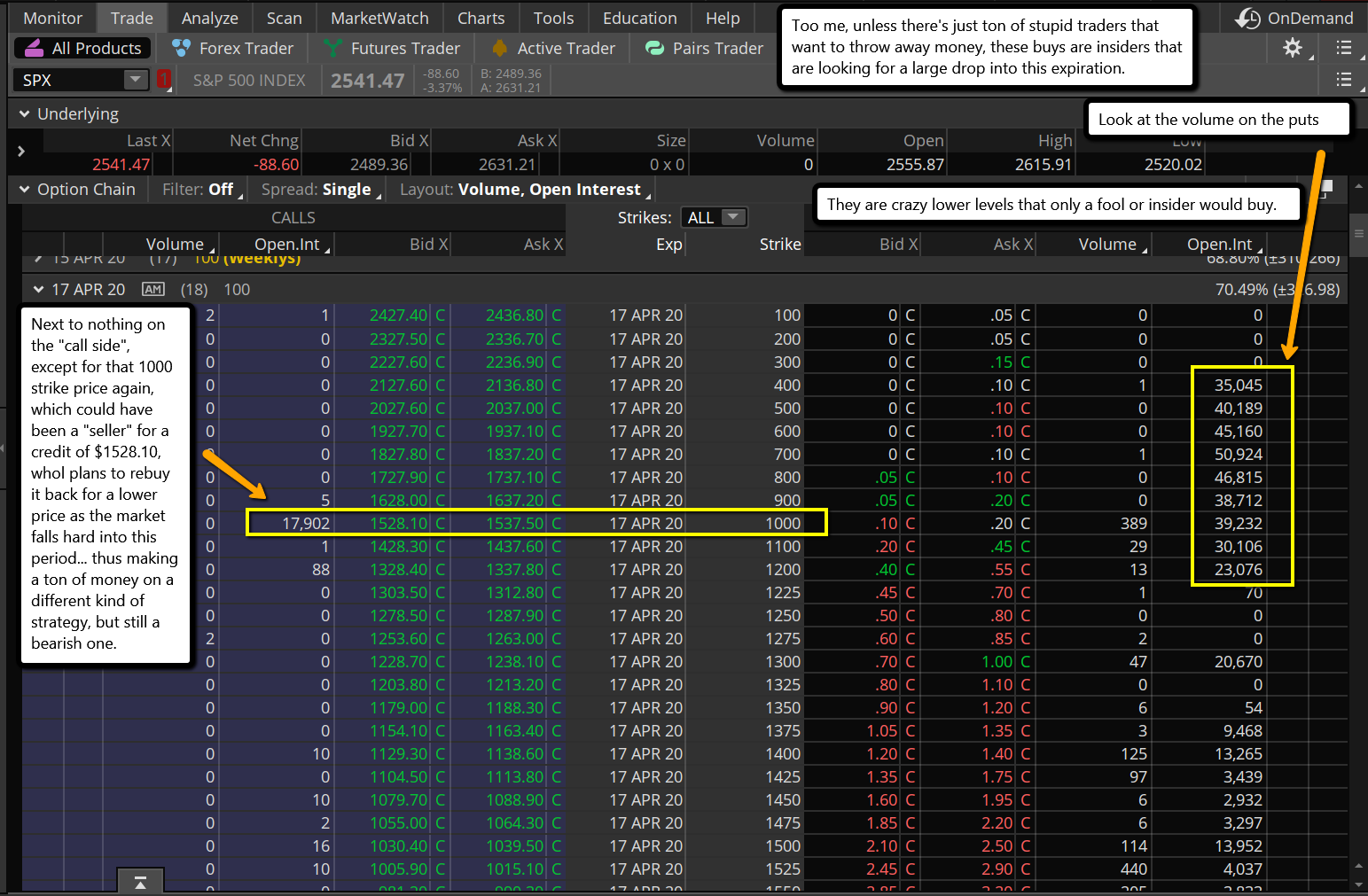 And Lastly, Let's Revisit The Past...

Here's another clue via a very old FP on the VIX showing a crazy, no way, impossible high (or is it?) of 349.72 from June 24th, 2010. Yeah, it's very old, but we all know the stock market is rigged and planned out in advance for months or years... or even decades? Could this FP level be hit on the large C wave down drop to 15,000 area on the DOW into the April 17th expiration? 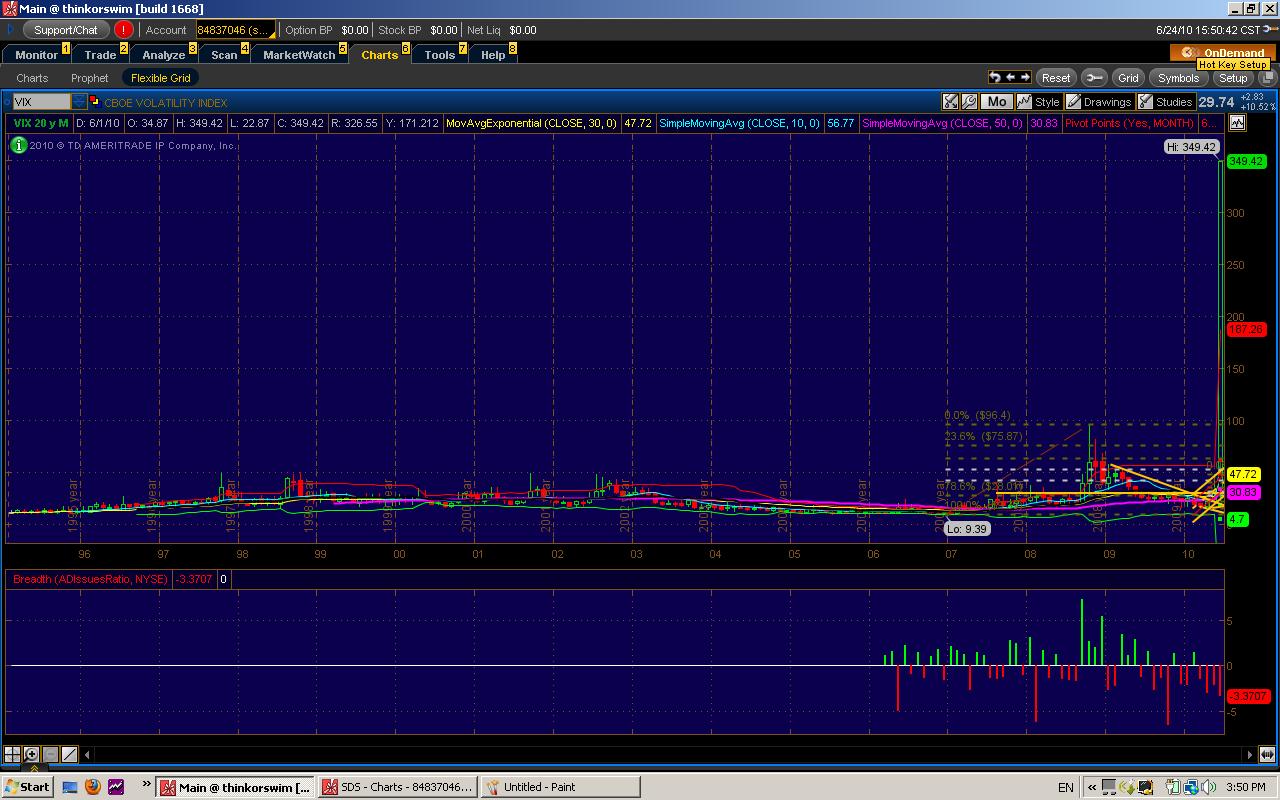 I never thought we could hit 85.47 but we did on March 18th, 2020, so 300+ isn't totally out of reach I guess?  I mean, if we really are going to have "10 Days Of Darkness" where the military goes out and arrests thousands of satanists, then it truly will be a "Biblical Event", and if so, then an insanely crazy high level on the VIX could indeed happen.

I'm not saying that it's going to happen, or that you should all go buy wildcard puts.  I'm just providing you the evidence I have discovered so far and put them all together on this one post.  From a technical point of view (and Elliottwave) we should have another move down as we do not have any positive divergence yet (needed to support a bottom), and we don't really have a clean ABC wave pattern either.

So I'll be looking closely at this coming Tuesday or Wednesday for a high on the B wave up.  My guess in somewhere in the 2700 SPX area (low side) to 2860 or so (high side).  If hit and a short is triggered (via many technical points of view), I'll just short it like I would any other move up.  But I'm not sure on how far we drop of course, as we'll just have to take it one day at a time and see how far it drops.

Have a blessed month of April and never forget that Jesus died for all us sinners, and he (and God) are in full control.