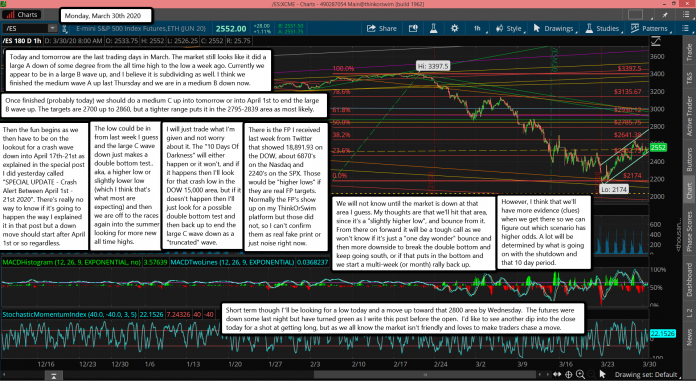 Today and tomorrow are the last trading days in March. The market still looks like it did a large A down of some degree from the all time high to the low a week ago. Currently we appear to be in a large B wave up, and I believe it is subdividing as well. I think we finished the medium wave A up last Thursday and we are in a medium B down now.

Then the fun begins as we then have to be on the lookout for a crash wave down into April 17th-21st as explained in the special post I did yesterday called "SPECIAL UPDATE - Crash Alert Between April 1st - 21st 2020". There's really no way to know if it's going to happen the way I explained it in that post but a down move should start after April 1st or so regardless.

The low could be in from last week I guess and the large C wave down just makes a double bottom test.. aka, a higher low or slightly lower low (which I think that's what most are expecting) and then we are off to the races again into the summer looking for more new all time highs.

I will just trade what I'm given and not worry about it. The "10 Days Of Darkness" will either happen or it won't, and if it happens then I'll look for that crash low in the DOW 15,000 area, but if it doesn't happen then I'll just look for a possible double bottom test and then back up to end the large C wave down as a "truncated" wave.

There is the FP I received last week from Twitter that showed 18,891.93 on the DOW, about 6870's on the Nasdaq and 2240's on the SPX. Those would be "higher lows" if they are real FP targets. Normally the FP's show up on my ThinkOrSwim platform but those did not, so I can't confirm them as real fake print or just noise right now.

We will not know until the market is down at that area I guess. My thoughts are that we'll hit that area, since it's a "slightly higher low", and bounce from it. From there on forward it will be a tough call as we won't know if it's just a "one day wonder" bounce and then more downside to break the double bottom and keep going south, or if that puts in the bottom and we start a multi-week (or month) rally back up.

However, I think that we'll have more evidence (clues) when we get there so we can figure out which scenario has higher odds. A lot will be determined by what is going on with the shutdown and that 10 day period.

Short term though I''ll be looking for a low today and a move up toward that 2800 area by Wednesday.  The futures were down some last night but have turned green as I write this post before the open.  I'd like to see another dip into the close today for a shot at getting long, but as we all know the market isn't friendly and loves to make traders chase a move.