I now have 5 new downside FP's, and with the market getting very tired and looking overbought I have to think these prints are real and that we well hit them soon.

As I've mentioned many times the upside FP of 305.17 on the SPY should be hit at some point... but "when" is unknown?  On the May 19th, 2020 morning update I showed an image from a video that Peter Eliades did that shows the blue offset line up around the 3060 SPX zone where I estimate it would be at when the (if?) the SPY hits 305.17, and if that blue offset is crossed then Peters software will completely confirm that a double top high is in play.

I tend to think that even-though several other time frames has confirmed his upside projections this last one will fail and rollover to give us a new downside projection... which should align up with the FP's I have as well.

Why do I think is upside projections will be killed you ask?  Simply because I believe the FP on the SPY of 305.17 is real and will mark the high for this move.  Then a drop to the new downside FP's for "higher lows" then the March 23rd low.  After that... who knows? I suspect we'll rally back up going into the election but I'm mixed on whether or not we make a new all time high or just some series of lower highs going into the rest of this year and next.

Let's worry about that later...

Here's some clues in the "numbers":

With the 29th date for the downside FP you get 11 there on that date alone.  You get 22 of course for the year and still 4 for the month of April.  That's 37 added all up, so again... nothing obvious here either.

Sometimes they put out clues in the FP's but not always.  I remember back when I got my very first fake print in 2010.  This was it... 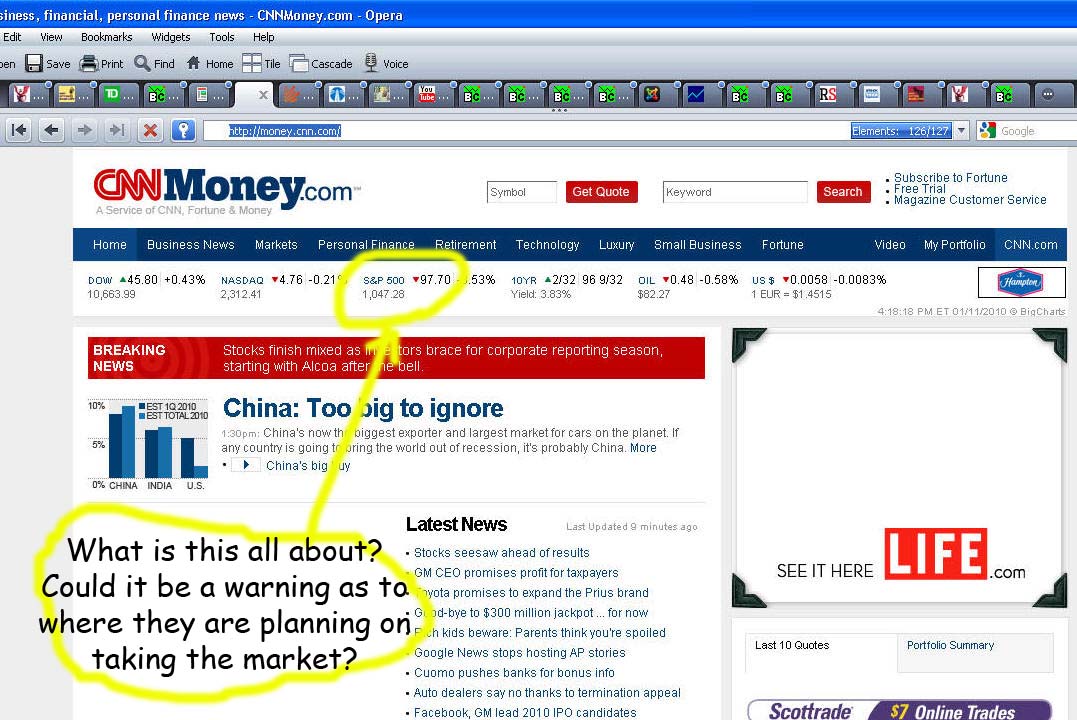 Since it was my first experience with what I started to call "Fake Prints" I didn't know what to expect.  I also didn't know about the ritual numbers either.  But note that it was put out on January 11th, 2010... which is an obvious "11" day.  January is the 1sth month, so that's 111 if you don't add them and just type them out. 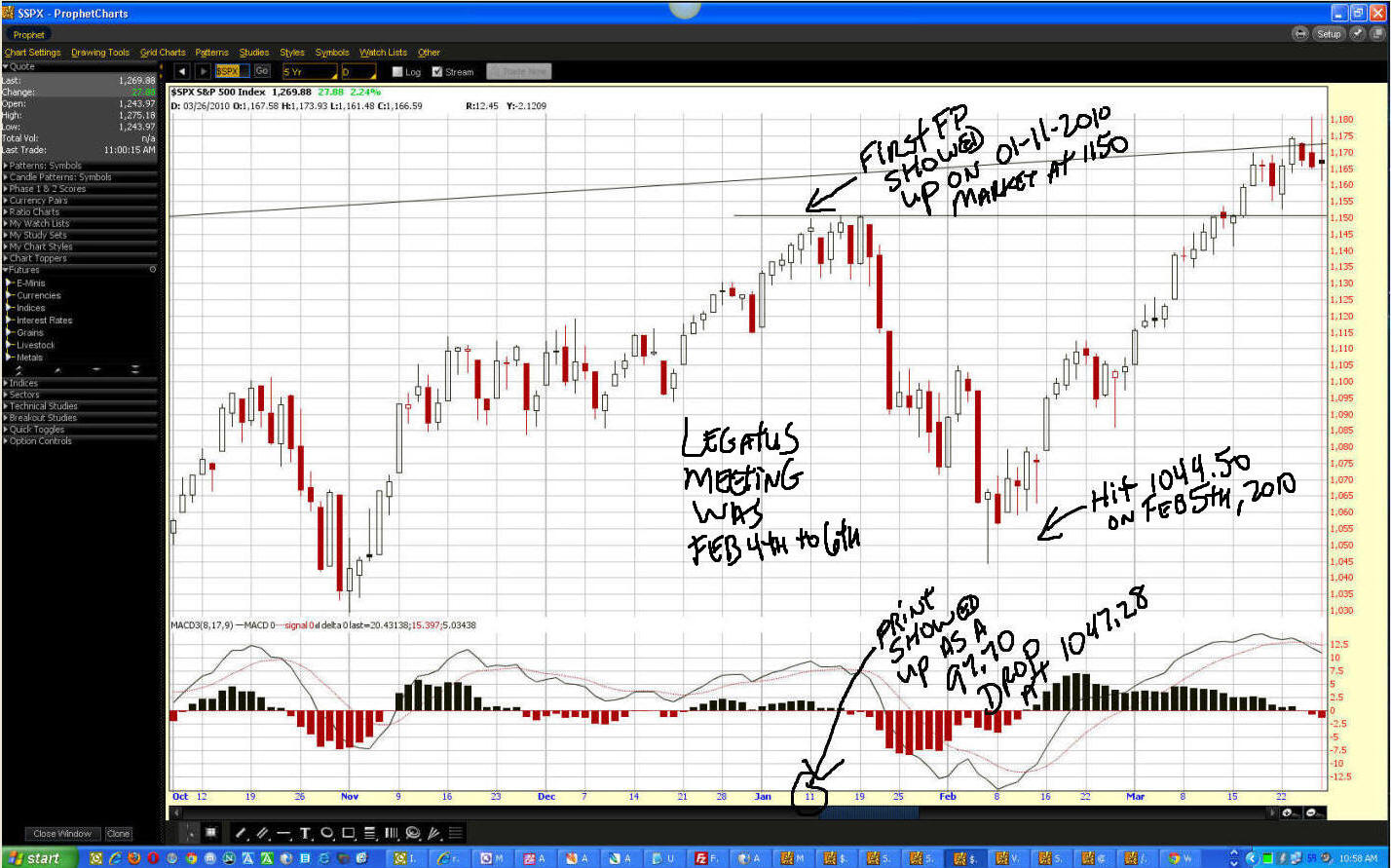 I'm not going to go into too much about the importance of Legatus meetings as I've covered that many times in the past 10+ years.  Put to summarize the elite like to meet at these meetings and many of them are "turns" in the stock market.  The more important ones are when they are close to the Vatican as they are the only bank in the world where you do NOT need to give your name or personal information to open an account.  You get a skeleton key and a long account number and that's it.  The perfect bank to launder stolen money at.

And back then on February 5th, 2010 we see the market bottomed and "turned" into a meeting that was held from the 4th to the 6th.  This coming May 31st, 2020 we have the Legatus people ending a shutdown (meaning they will re-open all future meetings) due to the fake pandemic corona virus... is it a "turning date"?   https://legatus.org/event/legatus-events-conferences-novel-coronavirus/

As for how to read the numbers...

Understanding the hidden "codes" the elite put out in the dates and price levels isn't something I'll likely ever "fully" decipher but playing around with them does help.  Sometimes I will add them together and other times I will leave them.  The point is that you must be flexible to try and figure out what they are saying.

You can't really use ritual numbers for timing the stock market as they aren't just used for it, but for any "event" they have planned. The number 33 is important as well to them as it's the age they killed Jesus. It's also the level in the Free Masons that you must accept satan as your master if you want to achieve it. I'm not saying all people inside the Masons are bad as most don't know that. You only learn it at that 33rd degree.

Moving on to the downside FP's... 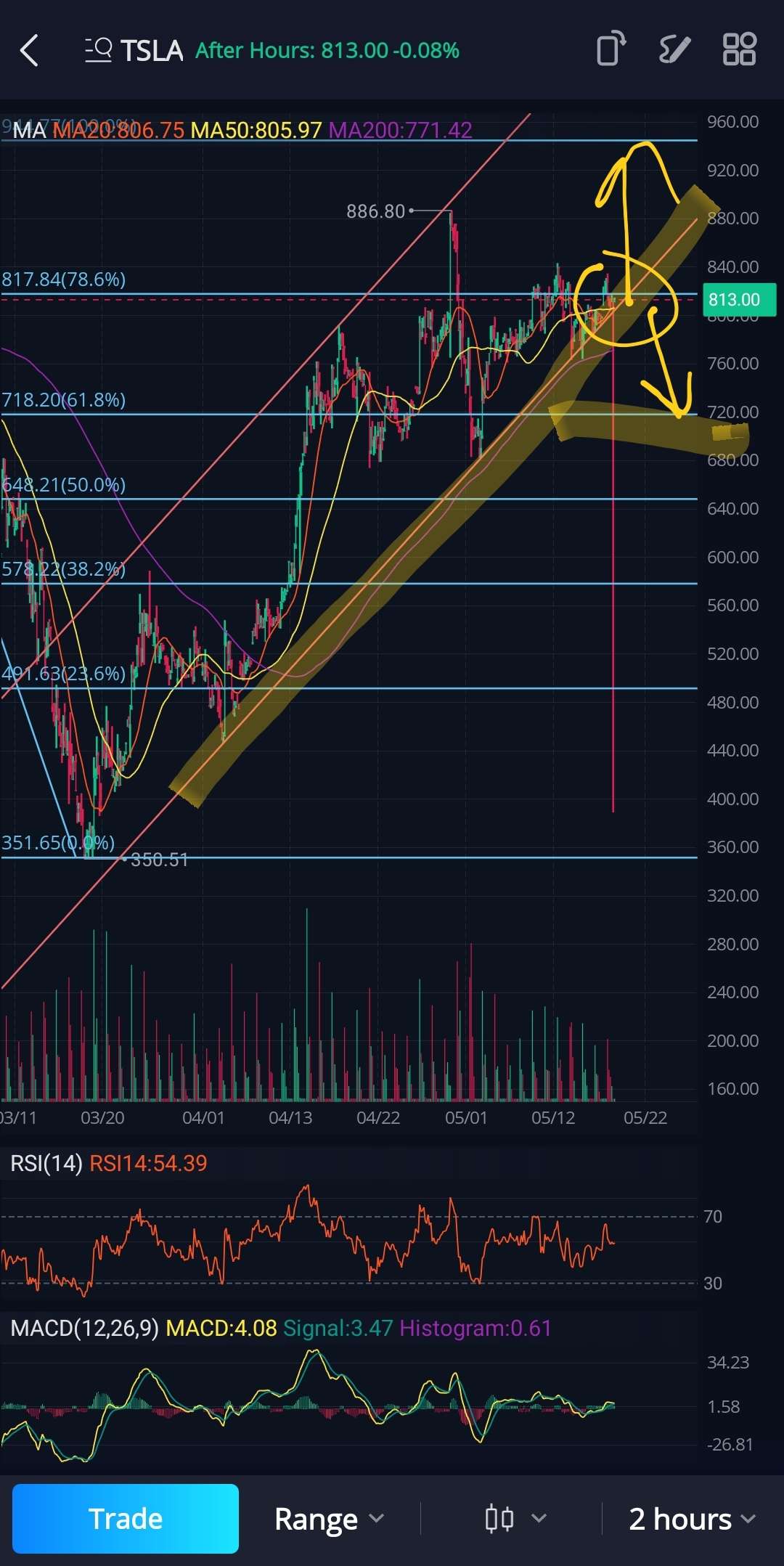 The downside level isn't known exactly but it clearly a little under 400 and slightly above the March 23rd, 2020 low.

I don't see much in the "numbers" as far as ritual codes for the last 2 FP's but if you see something I've missed please let me know.

Why are the "codes" in the numbers important now?

Well, normally I don't pay too much attention to the numbers in the various FP's I get as I just focus on the price level and try to figure out the "when" part for it hitting.  But yesterday they put out an interesting code in the closing for the DOW.  It ended the day with a big rally up, which was over a 1,000 points intraday.  But at the close it ended up a total of 911 points.  Freaky?  Yeah... 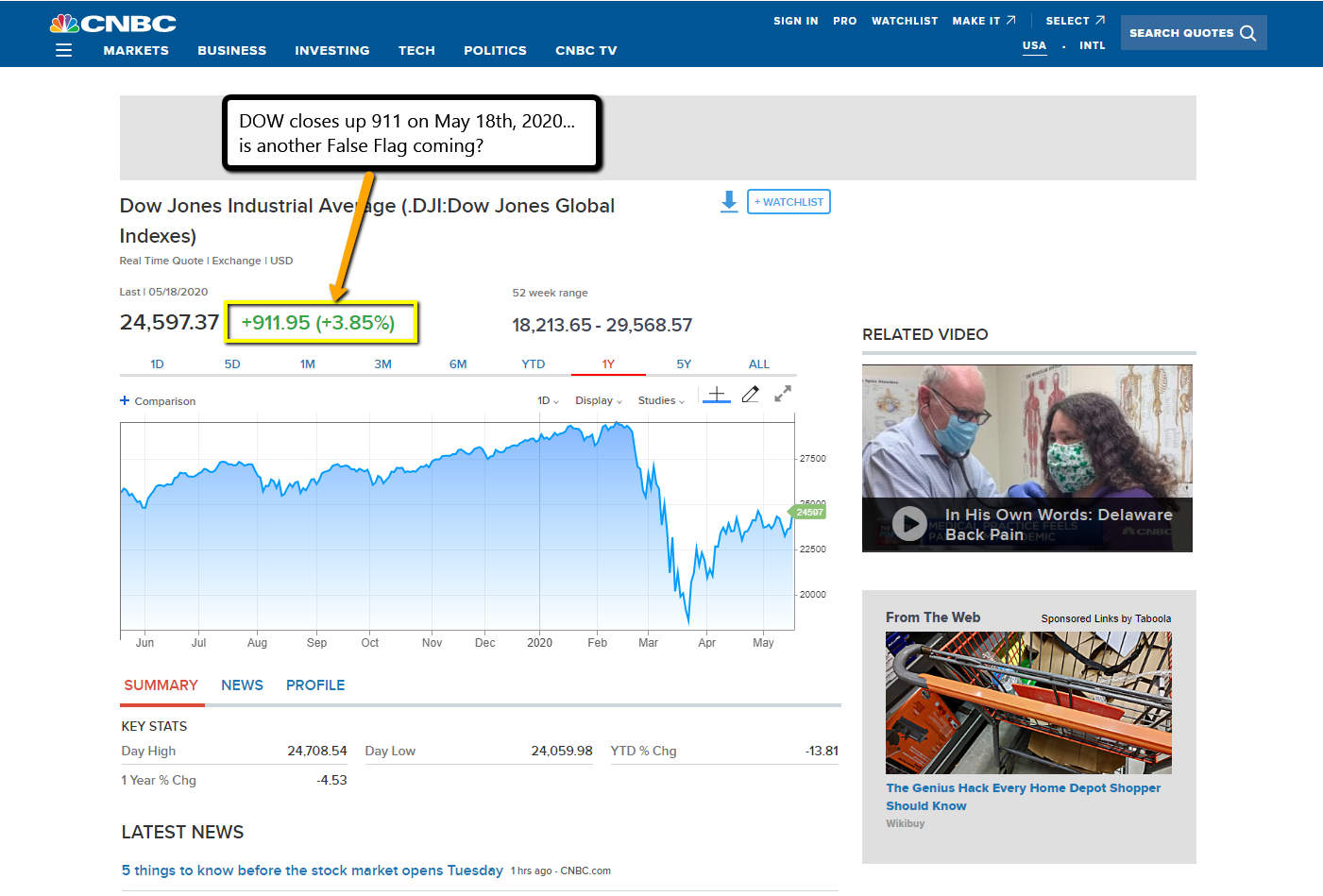 Is this a signal that we are going to have another False Flag event in the near future?  We know they told us years in advance that they planned to take down the twin towers as it was on the cover a  magazine in an episode of the Simpsons.  Plus there was a TV series that lasted one year called "The Lone Gunmen" that had an episode where they fly a plane into a building.  So it was foretold in advance as they must do (God's laws).

I've covered how 3 different people are looking for something big to happen between now and the end of May in this post:  https://reddragonleo.com/2020/05/19/es-morning-update-may-19th-2020/

So you have a possible Flash Crash window with Raj, and a "Panic Cycle" on May 25th from Martin Armstrong, and something on May 21st with Bo Polny... added with this 911 code on the DOW and all the FP's showing up says something is likely coming, and soon.

In Bo's video he speaks of May 31st to September 18th as something incredible happening.  He speculated that it will be the release of new technology and possibly (me thinking this) some big time arrests of all these satanists that keep attacking President Trump.

Now this period doesn't necessarily correlate to the stock market going up or down, but with the combined clues we have here it would make more sense to hit the FP lows going into May 31st and then start a huge rally up into September 18th... which if the current upside FP on the SPY of 305.17 isn't hit before the drop then it could be the target high in September?  Just guessing there...

In conclusion we have many pieces of the puzzle now that suggest we could drop hard into the end of this month and we have 5 different FP's to help us know where the bottom is likely put in at.  The timing is always hard but May 20th starts the new June VIX contract, so if the market makers plan to spike it higher again (to sell naked calls on it), then tanking the market into the end of this month could be the plan.

I'd expect the FP's to be hit around the end of this month or early June, and then the next big rally up to start.  This of course is NOT trading advise.  It's just me putting all the clues together to "hopefully" get the correct picture for what is coming in the next few weeks.

I hope this special update was of value to you and everyone reading it.  May God bless you and protect you in these tough times, that could be early into the ending times from the book of Revelations.

P.S.  Here's one more FP on IWM that shows a low of 103.87 from May 6th 2020, which is just slightly higher then the low on 4/2, and that's what most are calling the bottom of wave 2.  I'm not an Ellliottwave expert but it does allow for the drop to be just a very large wave 4 down of some degree.  I'm not sure how to count it all the waves until after they happen so I won't both even trying right now.